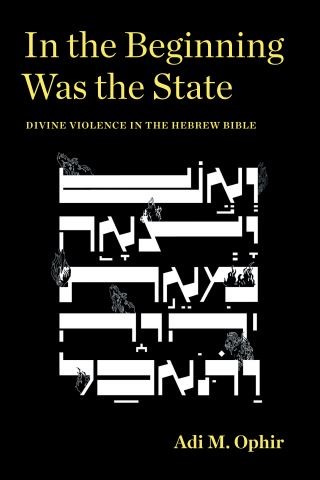 In the Beginning Was the State

Divine Violence in the Hebrew Bible

This book explores God’s use of violence as depicted in the Hebrew Bible. Focusing on the Pentateuch, it reads biblical narratives and codes of law as documenting formations of theopolitical imagination. Ophir deciphers the logic of divine rule that these documents betray, with a special attention to the place of violence within it. The book draws from contemporary biblical scholarship, while also engaging critically with contemporary political theory and political theology, including the work of Walter Benjamin, Giorgio Agamben, Jan Assmann, Regina Schwartz, and Michael Walzer.

Ophir focuses on three distinct theocratic formations: the rule of disaster, where catastrophes are used as means of governance; the biopolitical rule of the holy, where divine violence is spatially demarcated and personally targeted; and the rule of law where divine violence is vividly remembered and its return is projected, anticipated, and yet postponed, creating a prolonged lull for the text’s present.

Different as these formations are, Ophir shows how they share an urform that anticipates the main outlines of the modern European state, which has monopolized the entire globe. A critique of the modern state, the book argues, must begin in revisiting the deification of the state, unpacking its mostly repressed theological dimension.

Adi M. Ophir: Adi M. Ophir is a Visiting Professor at the Cogut Institute for the Humanities at Brown University and Professor Emeritus at Tel Aviv University. Among his works are Goy: Israel’s Multiple Others and the Birth of the Gentile, co‑authored with Ishay Rosen-Zvi (Oxford University Press, 2018); Divine Violence: Two Essays on God and Disaster (The Van Leer Institute, 2013); The One-State Condition, co‑authored with Ariella Azoulay (Stanford University Press, 2012); and The Order of Evils: Toward an Ontology of Morals (Zone, 2005).