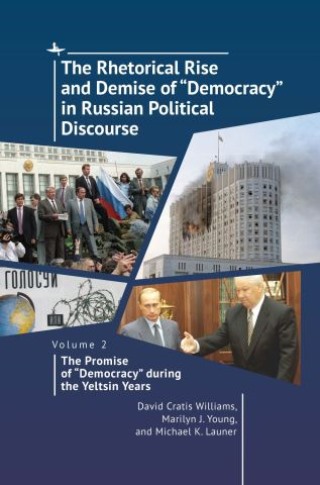 The Rhetorical Rise and Demise of “Democracy” in Russian Political Discourse. Volume 2:

The Promise of “Democracy” during the Yeltsin Years

Post-Soviet Russia in the 1990s saw a surge in civic participation. The traditional power structure officially relinquished control of political rhetoric and a nascent civil society had begun to emerge. Free elections and political partisanship between reformist and conservative elements of Russian society, spurred on by Russia’s economic troubles, gave a “Wild West” tenor to public rhetoric that was reflected in the election campaigns of 1993, 1995, and 1996. In this volume, the authors examine, through a series of contemporaneously written essays, the arc of government rhetoric during the height of media freedom, the quest for a new national identity, and the struggle for self-government.

David Cratis Williams: David Cratis Williams is Professor of Communication and Rhetorical Studies at Florida Atlantic University. His scholarship focuses on argumentation, rhetorical theory, and criticism; he is a recognized authority on Kenneth Burke. His work on Russian political discourse began during a meeting in Russia in January 1992.|||Marilyn J. Young is the Wayne C. Minnick Professor of Communication Emerita at Florida State University. Her research has focused on political argument with an emphasis on the development of political rhetoric and argument in the former Soviet Union, particularly Russia. She remains an active scholar in retirement.|||Michael K. Launer is Professor Emeritus of Russian at Florida State University. In 1987 he interpreted for the first group of Soviet scientists visiting the US following Chernobyl. A State Department certified technical interpreter, he supported Nuclear Regulatory Commission and Department of Energy assistance programs through 2012.