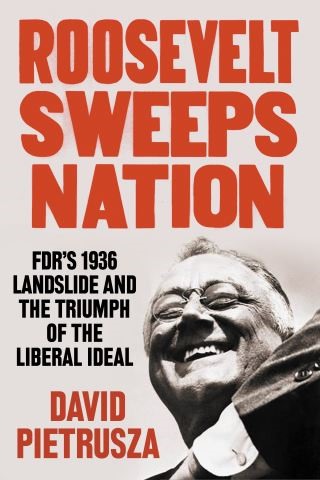 FDR’s 1936 Landslide and the Triumph of the Liberal Ideal

From the acclaimed author of 1920: The Year of the Six Presidents and 1960: LJB vs JFK vs Nixon—The Epic Campaign that Forged Three Presidencies comes a dazzling panorama of presidential and political personalities, ambitions, plots, and counterplots; racism, anti-Semitism, anti-socialism, and anti-communism, and the landslide referendum on FDR’s New Deal policies in the 1936 presidential election.

Award-winning historian David Pietrusza boldly steers clear of the pat narrative regarding Franklin Roosevelt’s unprecedented 1936 re-election landslide, weaving an enormously more intricate, ever more surprising tale of a polarized nation; of America’s most complex, calculating, and politically successful president, Franklin D. Roosevelt, at the very top of his Machiavellian game; and the unlocking of the puzzle of how our society, our politics, and our parties fitfully reinvented themselves.

With in-depth examinations of rabble-rousing Democratic US Senator Huey Long and his assassination before he was able to challenge FDR in ’36; powerful, but widely hated, newspaper baron William Randolph Hearst, who blasted FDR’s “Raw Deal”; wildly popular, radical radio commentator Father Coughlin; the steamrolled passage of Social Security and backlash against it; the era’s racism anti-Semitism; American Socialism and Communism; and a Supreme Court seemingly bent on dismantling the New Deal altogether, Roosevelt Sweeps Nation is a vivid portrait of a dynamic Depression-Era America.

Crafting his account from an impressive and unprecedented collection of primary and secondary sources, Pietrusza has produced an engrossing, original, and authoritative account of an election, a president, and a nation at the crossroads. The nation’s stakes were high . . . and the parallels hauntingly akin to today’s dangerously strife-ridden political and culture wars.

David Pietrusza’s books include 1920: The Year of Six Presidents; Rothstein: The Life, Times, and Murder of the Criminal Genius Who Fixed the 1919 World Series; 1948: Harry Truman's Improbable Victory and the Year that Transformed America's Role in the World; 1960: LBJ vs. JFK vs. Nixon: The Epic Campaign that Forged Three Presidencies; and 1932: The Rise of Hitler and FDR—Two Tales of Politics, Betrayal, and Unlikely Destiny. Rothstein was a finalist for an Edgar Award in the Best Fact Crime category, and 1920 was honored by Kirkus Reviews as among their "Books of the Year."

He lives in Scotia, New York.