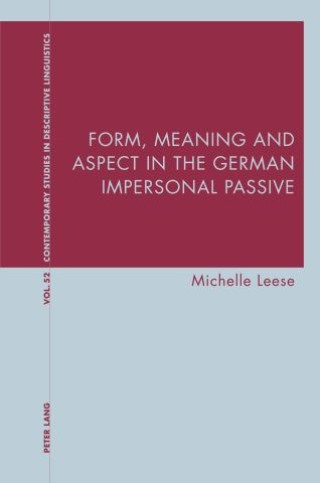 Form, Meaning and Aspect in the German Impersonal Passive

«Michelle Leese's book is a must-read for those interested in the German impersonal passive. Based on an experimental study of almost 400 zero-argument passives she convincingly shows that this allegedly "exceptional" passive is the very core from which all werden-passives in their meaning as "event-focused action" are derived.»

«This book presents a vast amount of original data to confront a glaring weakness of the aspect analysis of the German passive: if the actional passive is telic, why is the impersonal passive of the type Es wurde getanzt atelic? The answer given is a revelation delightful in its simplicity.»

Actional passives are conventionally considered to be the result of a voice analysis conversion process. They are said to derive from semantically identical underlying actives, even though most passives do not contain the agent – the entity carrying out the action – that would be crucial to such a conversion. Beedham’s aspect analysis offered an alternative perspective which discarded any notion of a mandatory connection to the active, and instead proposed that passive formation requires only a lexically telic verb, compositional telicity and a patient (affected entity) subject.

This book challenges both these analyses via an empirical investigation into the somewhat neglected impersonal passive in German of the type Es wurde getanzt, which, as a zero-argument, atelic construction, exists as an exception to both the voice and aspect analysis rules. Using the theoretical framework of Saussurean structuralism and Beedham’s «method of exceptions and their correlations», this book presents a new, «event-focused» analysis of both this impersonal passive and the German actional passive in general; plus, it proposes that since Es wurde getanzt, as the barest form of passive and the closest realisation of the werden + ge-V-t core of all passives, is atelic, this werden-passive core too is atelic.

MICHELLE LEESE completed her PhD in German Linguistics at the University of St Andrews, Scotland, passing with no corrections in 2019. She was awarded a St Andrews School of Modern Languages 7th Century PhD Scholarship in 2014, which facilitated her doctoral research. Prior to her PhD, she achieved an MLitt in Language and Linguistics with Distinction at St Andrews in 2013, having written a dissertation on the German impersonal passive which went on to become the foundational study upon which her PhD project was built. She also has an MA in Modern Languages (German) from St John’s College, Oxford.