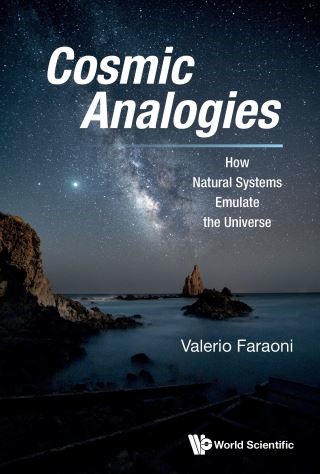 How Natural Systems Emulate the Universe

This book discusses analogies between relativistic cosmology and various physical systems or phenomena, mostly in the earth sciences, that are described formally by the same equations. Of the two independent equations describing the universe as a whole, one (the Friedmann equation) has the form of an energy conservation equation for one-dimensional motion. The second equation is fairly easy to satisfy (although not automatic): as a result, cosmology lends itself to analogies with several systems. Given that a variety of universes are mathematically possible, several analogies exist. Analogies discussed in this book include equilibrium beach profiles, glacial valleys, the shapes of glaciers, heating/cooling models, freezing bodies of water, capillary fluids, Omori's law for earthquake aftershocks, lava flows, and a few mathematical analogies (Fibonacci's sequence, logistic equation, geodesics of various spaces, and classic variational problems). A century of research in cosmology can solve problems on the other side of an analogy, which in turn can suggest ideas in gravity. Finding a cosmic analogy solves the inverse variational problem of finding a Lagrangian and a Hamiltonian for that system, when nobody thought one exists. Often, the symmetries of the cosmological equations translate in new symmetries of the analogous system. The book surprises the reader with analogies between natural systems and exotic systems such as possible universes.