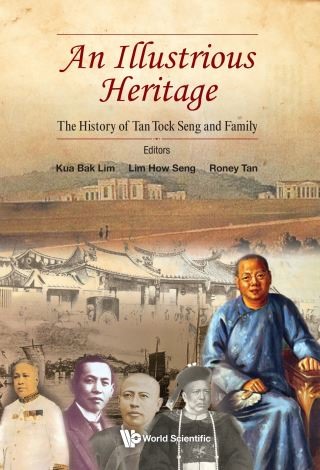 The History of Tan Tock Seng and Family

Tan Tock Seng, one of Singapore's most illustrious pioneers, was an influential Chinese community leader. In the early 1820s, he responded to Sir Stamford Raffles' call to open up Singapore for trade, and later became a prominent entrepreneur, a social leader of the Chinese community and a philanthropist. He also spearheaded the building of the Thian Hock Keng Temple as a rallying point for his fellow clansmen, as well as the Tan Tock Seng Hospital to provide medical services for people in Singapore.

This book provides a comprehensive account of Tan Tock Seng's life, tracing his life and legacy, as well as the contributions of himself and his family. It also includes prominent family members such as Tan Kim Ching, Tan Teck Guan, Tan Boo Liat, Tan Chay Yan and Tan Hoon Siang. The fruits of their contributions have greatly impacted communities in Singapore, as well as other countries in the region.

In delineating the Tan family's life and contributions, perspectives into the social, political and business workings of the lives of Overseas Chinese immigrants during the colonial era are also brought to light. Their legacy beyond Singapore's shores also highlights the regional networks of business and Chinese settlement in Nanyang. These stories bring complexity and nuance to broad-stroke developments, events and milestones in Singapore history, enhancing popular understanding and appreciation of Singapore.

Readership: General readers interested in the history and life of Tan Tock Seng and his family, and the contributions they have made towards Singapore and the region's developments.

'You can't have anyone better than Mr Kua Bak Lim. He has done more for the advancement of Singapore heritage than anyone I know.' - Wang GungwuUniversity Professor, National University of Singapore

'Tan Tock Seng was prominent pioneer, philanthropist and community leader whose links with the history of Singapore is permanently etched in the hospital that bears his name. Beyond the general name recognition, the story behind the man and his family is not well known. Thanks to the effort of two noted local historians, Kua Bak Lim and Lim How Seng, and Roney Tan, a fifth-generation scion of Tan Tock Seng, a first detailed chronicle of the life and achievements of the man and his family is now available. Built on painstaking research in colonial and family archives, and enriched by Chinese, Thai and Japanese materials, this book offers a riveting story of migration, settlement, network-building and the personal accomplishments of an important pioneer and his descendants. The story of Tan Tock Seng and his family reflects the social and economic history of Singapore.' - Tan Tai YongPresident, Yale-NUS College

'This book is a must read for those among us who associate Tan Tock Seng with the hospital which bears his name and the Thian Hock Keng temple. We are fortunate that Kua Bak Lim and Lim How Seng, two veteran historians of the Chinese community in Singapore, have in this book given us a detailed account with new insights of not only Tan Tock Seng but also his son and grandson. The descendants of Tan Tock Seng have got an eminent group of historians to write this definitive history of their family patriarch.' - Kwa Chong GuanAdjunct Associate Professor, National University of Singapore

'The book is rich and heartening a read on how his family and our community have come together to build the legacy of care that Tan Tock Seng has ignited. It provides us not just a historical record but a living manuscript of care, contribution, and community for and by generations to come.' - Eugene Fidelis SohCEO, Tan Tock Seng Hospital & Central Health

'Well-researched, thought-provoking and inspiring historical accounts of Tan Tock Seng — founder of Thian Hock Keng and Singapore Hokkien Huay Kuan (SHHK) — and descendants, including Tan Kim Ching and Tan Boo Liat who also led SHHK during its founding years. An enjoyable and intriguing read for history enthusiasts and anyone with a keen interest to deep dive into the beginnings of national monument Thian Hock Keng as well as the multifaceted contributions by the Tan family to the community, society and region, for more than five generations.' - Thomas ChuaPresident, Singapore Hokkien Huay