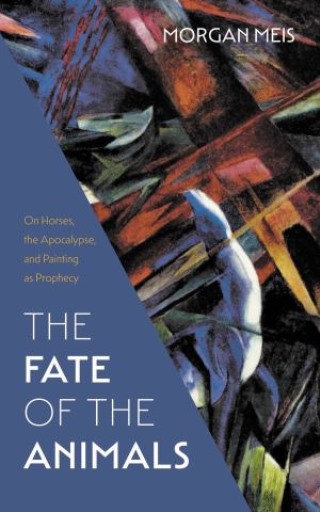 The Fate of the Animals

On Horses, the Apocalypse, and Painting as Prophecy

In 1913, Franz Marc, one of the key figures of German Expressionism, created a masterpiece: The Fate of the Animals. With its violent slashes of color and line, the painting seemed to pre-figure both the outbreak of World War I and, more eerily, Marc's own death in an artillery barrage at the Battle of Verdun three years later.

With his signature blend of wide-ranging erudition and lively, accessible prose, Morgan Meis explores Marc's painting in depth, guided in part by a series of letters Marc wrote to his wife Maria while he was a soldier in the war. In those letters, Marc explores the nature of art, the fate of European civilization, and the inner spiritual nature of all life.

Along the way, Meis brings in other artists such as D.H. Lawrence, Edgar Degas, and Paul Klee to flesh out his argument. The Fate of the Animals also explores the darker undercurrents of German apocalyptic thinking in Marc's time, especially Norse mythology and the ancient Vedic texts as they influenced Schopenhauer, Nietzsche, and Heidegger.

The Fate of the Animals is the second volume of Meis's Three Paintings Trilogy, the first volume of which, The Drunken Silenus, examined a painting by Rubens. The third volume (forthcoming) will consider a painting by Joan Mitchell.

Morgan Meis: Morgan Meis writes about art and culture for such magazines as n+1, Harper's, and Slate. He is a contributor at The New Yorker. He won the Whiting Award for nonfiction in 2013. He has a PhD in philosophy from The New School for Social Research. He lives in Detroit.