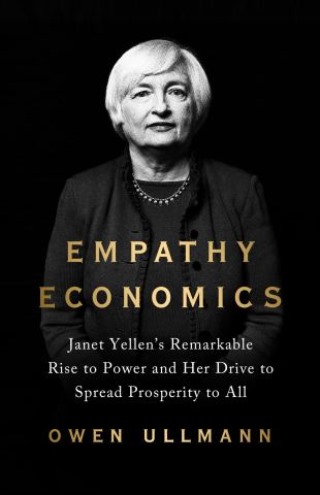 The trailblazing story of Janet Yellen, the Ruth Bader Ginsburg of economics, and her lifelong advocacy for an economics of empathy that delivers the fruits of a prosperous society to people at the bottom half of the economic ladder.

When President Biden announced Janet Yellen as his choice for secretary of the treasury, it was the peak moment of a remarkable life. Not only the first woman in the more than two-century history of the office, Yellen is the first person to hold all three top economic policy jobs in the United States: chair of both the Federal Reserve and the President’s Council of Economic Advisors as well as treasury secretary.

Through Owen Ullmann’s intimate portrait, we glean two remarkable aspects of Yellen’s approach to economics: first, her commitment to putting those on the bottom half of the economic ladder at the center of economic policy, and employing forward-looking ideas to use the power of government to create a more prosperous, productive life for everyone. And second, her ability to maintain humanity in a Washington policy world where fierce political combat casts others as either friend or enemy, never more so than in our current age of polarization.

As Ullmann takes us through Yellen’s life and work, we clearly see her brilliance and meticulous preparation. What stands out, though, is Yellen as an icon of progress—the “Ruth Bader Ginsburg of economics”—a superb-yet-different kind of player in a cold, male-dominated profession that all too often devises policies to benefit the already well-to-do. With humility and compassion as her trademarks, we see the influence of Yellen’s father, a physician whose pay-what-you-can philosophy meant never turning anyone away. That compassion, rooted in her family life in Brooklyn, now extends across our entire country.

Owen Ullmann: Owen Ullmann’s five-decade career in journalism began as a reporter for The Elizabeth N.J. Daily Journal. More recently he has held senior management and editorial positions at USA Today. Prior to USA Today he spent six years at Business Week magazine, where he managed the Washington Bureau as senior news editor. From 1983 to 1993, he worked in the Washington Bureau of Knight-Ridder Newspapers, covering economics, the White House and the State Department. He won two awards from the White House Correspondents’ Association for his coverage of the Reagan Presidency. Owen worked for the Associated Press from 1973 to 1983, as automotive writer in Detroit, and later as labor writer and chief economics correspondent in Washington. He currently serves as executive editor and Washington columnist for The International Economy, a quarterly magazine written for central bankers, finance ministers, financiers, and academics. He previously wrote a critically acclaimed biography of David Stockman, President Ronald Reagan’s brilliant and brash budget director.