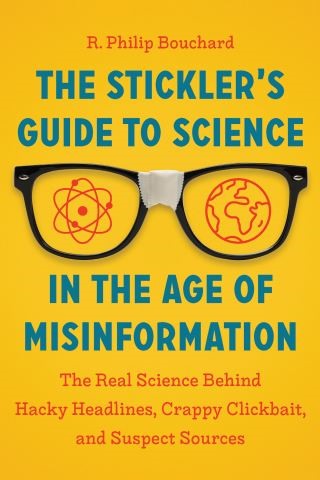 The Stickler's Guide to Science in the Age of Misinformation

The perfect remedy for our culture of fake news, bad science, and propaganda.

We have more scientific information at our fingertips today than ever before. And more disinformation too. Online, on television, and in print, science is often communicated through shorthand analogies and phrases that obscure or omit important facts. “Superfoods,” “right- and left-brained” people, and “global warming” may be snappy and ear-catching but are they backed by scientific facts? Lifelong educator R. Philip Bouchard is a stickler for this kind of thing, and he is well-prepared to set the record straight.

The Stickler’s Guide to Science in the Age of Misinformation unpacks the many misuses of terms we see used every day, revealing how these popular “scientific” concepts fall short of real science. Find out why trees do not “store” carbon dioxide; a day is not actually 24 hours; DNA cannot provide a “blueprint” for a human being; and an absence of gravity is not the reason that astronauts float in space.

R. Philip Bouchard:
R. Philip Bouchard is a lifelong “natural science nerd” with a track record of creating successful educational media. As a software engineer and educator, he designed the famous 1985 computer game The Oregon Trail, which went on to sell 65 million copies. Smithsonian magazine called the game "a cultural landmark” and TIME named it as one of the best ten videogames of all time. Bouchard holds bachelor’s and master’s degrees in botany from the University of Georgia and the University of Texas at Austin. He frequently publishes fun, insightful educational essays on the natural sciences on medium.com.