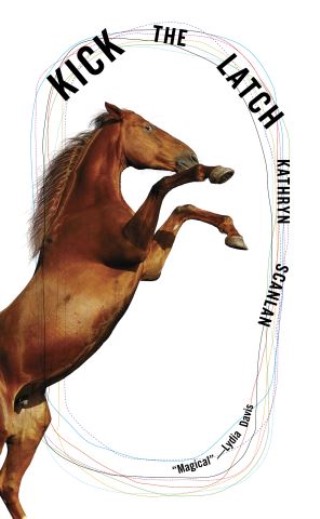 About one woman’s fine, hard life at the racetrack, Kick the Latch–with its ruthless concision and artful mysteries–is lightning in a bottle

Kathryn Scanlan’s Kick the Latch vividly captures the arc of one woman’s life at the racetrack—the flat land and ramshackle backstretch; the bad feelings and friction; the winner’s circle and the racetrack bar; the fancy suits and fancy boots; and the “particular language” of “grooms, jockeys, trainers, racing secretaries, stewards, pony people, hotwalkers, everybody”—with economy and integrity.

Based on transcribed interviews with Sonia, a horse trainer, the novel investigates form and authenticity in a feat of synthesis reminiscent of Charles Reznikoff’s Testimony. As Scanlan puts it, “I wanted to preserve—amplify, exaggerate—Sonia’s idiosyncratic speech, her bluntness, her flair as a storyteller. I arrived at what you could call a composite portrait of a self.” Whittled down with a fiercely singular artistry, Kick the Latch bangs out of the starting gate and carries the reader on a careening joyride around the inside track.

Kathryn Scanlan: Kathryn Scanlan received a 2021 American Academy of Arts and Letters Award for “exceptional accomplishment” in literature. Her story collection The Dominant Animal was named a Best Book of 2020 by The Guardian, Southwest Review, and Publishers Weekly, and her first book, Aug 9—Fog, was praised in a starred review by Publishers Weekly as “an outstanding debut, profound and moving: Scanlan’s portrait of an everywoman feels entirely new." She lives in Los Angeles.