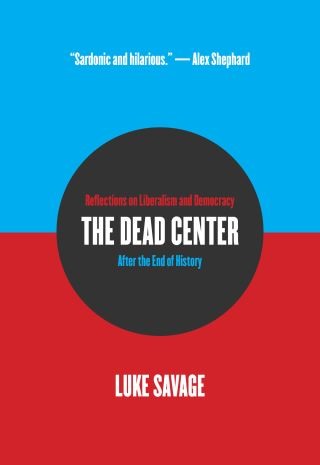 Reflections on Liberalism and Democracy After the End of History

The Dead Center takes an acerbic and often ribald eye to contemporary politics, particularly those of mainstream liberals in the United States. Combining engaging polemic and serious intellectual analysis, it offers a timely portrait of a political landscape sullied by an already ineffectual Biden administration, the marginalization of forces around Bernie Sanders and the ominous shadow of Donald Trump in the wings.

In these pages Jacobin staff writer Luke Savage exposes the hollowness and futility of the liberal project in the 21st century, offering searing critiques of some of its leading figures, notably Barack Obama and Justin Trudeau, and touching on topics that extend over the milquetoast politics of the Biden presidency, Aaron Sorkin’s The West Wing, the monopolists of Silicon Valley, and the worst excesses of cable news punditry. Always deeply informed, often on the basis of direct personal experience, Savage’s book also explores the recent trajectory of younger people away from the liberal mainstream and towards the socialist left.

Luke Savage is a writer and essayist whose work has appeared in The Atlantic, The New Statesman, The Washington Post, and The Guardian. Born in St John’s, Newfoundland, he studied political science, history, and philosophy at the University of Toronto, where he edited Canada’s largest student newspaper The Varsity. Having worked for several years as an investigative reporter covering Canadian politics and the far right, Luke has been a staff writer at Jacobin since 2018 – where he is a frequent commentator on American, British, and Canadian politics. He is co-host of the popular Michael and Us podcast, a twice-weekly show about politics, cinema, and our crumbling world.