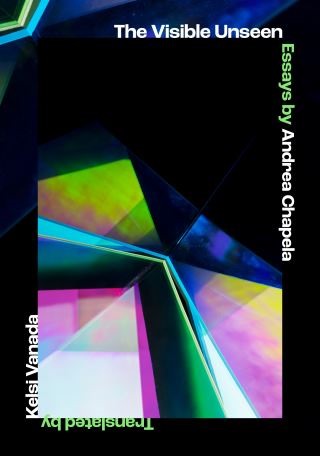 Andrea Chapela, one of Granta’s Best Young Spanish-Language Novelists of 2021, breaks down literary and scientific conventions in this prize-winning collection of experimental essays exploring the properties and poetics of glass, mirrors, and light as a means of understanding the self.

In powerful, formally inventive essays, The Visible Unseen disrupts the purported cultural divide between arts and science. As both a chemist and an award-winning author, Chapela zeros in on the literary metaphors buried in the facts and figures of her scientific observations. Through questioning scientific conundrums that lie beyond the limits of human perception, she winds up putting herself under the microscope as well.

While considering the technical definition of glass as a liquid or a solid, Chapela stumbles upon a framework for understanding the in-between-ness of her own life. Turning her focus toward mirrors, she finds metaphors for our cultural obsessions with self-image in the physics and chemistry of reflection. And as she compiles a history of the scientific study of light, she comes to her final conclusion: that the purpose of description—be it scientific or literary—can never be to define reality, only to confirm our perception of it. Lyrical, introspective, and methodical, The Visible Unseen constructs a startling new perspective from which to examine ourselves and the ways we create meaning.

Andrea Chapela: Andrea Chapela (Mexico City, 1990) has a degree in chemistry from the UNAM (National Autonomous University of Mexico) and an MFA in Spanish Creative Writing from the University of Iowa. She is the recipient of multiple awards including the José Luis Martínez National Prize for The Visible Unseen. Her stories have been published in the journals Tierra Adentro, Este País, and in various anthologies. In English translation, her publications include poems in The Brooklyn Rail InTranslation and an essay in Tupelo Quarterly. She was named one of Granta’s Best Young Spanish-Language Novelists in 2021.