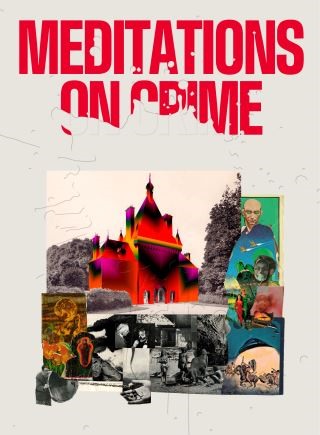 “Everyone is fascinated by crime,” says Harper Simon. “When you look at the history of song, romantic love songs may be the dominant mode of songwriting, but second would probably be songs involving crime—murder ballads, political protest songs;  crime is a major theme in all songwriting.”

Simon offers a new and expansive contribution to this legacy with Meditations on Crime, an ambitious multi-media project that includes an album he produced of musical collaborations with a sweeping range of contributors (Julia Holter, Gang Gang Dance, King Khan, the Sun Ra Arkestra) and a book he edited featuring essays by such notables as Miranda July, Hooman Majd, and Jerry Stahl, alongside artwork from giants like Cindy Sherman, Tracey Emin, Julian Schnabel, and Raymond Pettibon.

The genesis of Meditations on Crime came in 2016 as the confluence of several ideas. Simon was interested in collaborating with musicians he knew and admired, to create a vinyl LP with an accompanying book—"a beautiful physical object to stand outside the digital world.” Given what America was going through during that particular election year, though, he also thought it was a time that called for something more politically charged.

Meditations on Crime—if you get down to it, crime is politics and politics is crime, so crime can go a lot of different ways. It seemed to be a way of approaching the moment that was a little more subtle and left space to explore.”

The songs were developed in a variety of ways: Sometimes Simon sent his collaborators guitar tracks or demos he was working on and had them write over that, sometimes he collaborated on lyrics. On the Sun Ra Arkestra track, he composed  melodic themes and went to the group’s home base of Philadelphia with the legendary producer Hal Willner, where they fleshed out two songs (Willner passed away in 2020 from Covid; “to have that creative moment with him makes it really touching for me,” says Simon.

As he reached out to more musicians (“I kind of just went with my gut, and one person led to the next”), Simon retained a consistent backing band for most of the tracks to keep some cohesion. He played most of the guitars, with Paz Lenchantin from the Pixies on bass and Carla Azar, who has played with everyone from Jack White to PJ Harvey to The Who, on drums, as well as members of Ariel Pink’s band and Nick Zinner from the Yeah Yeah Yeah’s.

For the book, Simon points to “On Crime,” the essay by Nigerian novelist and poet Ben Okri, as a central piece. “It almost felt like an introduction because it was so philosophical,” he says. “It really set the tone and the book started to become less political and more interesting. Once that tone was set, you could go to this beautiful essay on war crimes by Janine di Giovanni, the famous foreign correspondent. You could see it go to a humorous piece by Jerry Stahl or an interview with Kenneth Anger. Wayne Kramer from the MC5 has a foundation called Jail Guitar Doors that brings musical instruments and songwriting to prisoners, and has spent time in prison himself, so I thought he would have an interesting perspective.”