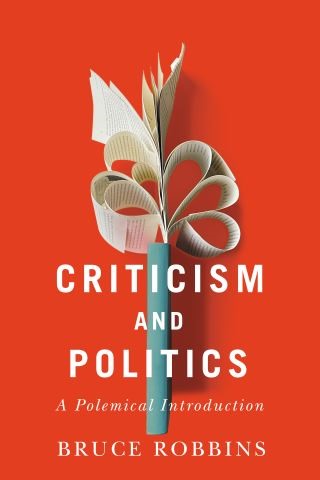 An accessible introduction to cultural theory and an original polemic about the purpose of criticism.

What is criticism for? Over the past few decades, impassioned disagreements over that question in the academy have burst into the news media. These conflicts have renewed the culture wars over the legacy of the 1960s, becoming entangled in national politics and leading to a new set of questions about critics and the power they do or don't wield.

Re-examining theorists from Matthew Arnold to Walter Benjamin, to Fredric Jameson, Stuart Hall, and Hortense Spillers, Criticism and Politics explores the animating contradictions that have long propelled literary studies: between pronouncing judgment and engaging in philosophical critique, between democracy and expertise, between political commitment and aesthetic autonomy. Both a leftist critic and a critic of the left, Robbins unflinchingly defends criticism from those who might wish to de-politicize it, arguing that working for change is not optional for critics, but rather a core part of their job description.

Bruce Robbins: Bruce Robbins is Old Dominion Foundation Professor in the Humanities, Columbia University. He is the author of Secular Vocations: Intellectuals, Professionalism, Culture (1993), Perpetual War: Cosmopolitanism from the Viewpoint of Violence (2012), and, most recently, The Beneficiary (2017).