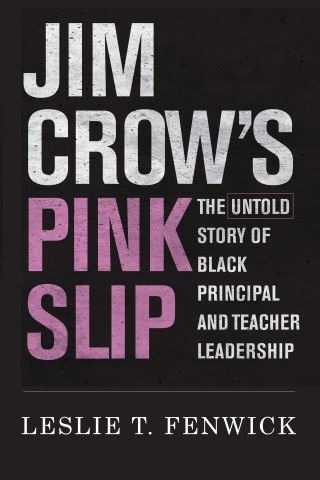 The Untold Story of Black Principal and Teacher Leadership

Jim Crow’s Pink Slip exposes the decades-long repercussions of a too-little-known result of resistance to the Brown v. Board of Education decision: the systematic dismissal of Black educators from public schools.

In 1954, the Supreme Court’s Brown decision ended segregated schooling in the United States, but regrettably, as documented in congressional testimony and transcripts, it also ended the careers of a generation of highly qualified and credentialed Black teachers and principals. In the Deep South and northern border states over the decades following Brown, Black schools were illegally closed and Black educators were displaced en masse. As educational policy and leadership expert Leslie T. Fenwick deftly demonstrates, the effects of these changes stand contrary to the democratic ideals of an integrated society and equal educational opportunity for all students.

Jim Crow’s Pink Slip provides a trenchant account of how tremendous the loss to the US educational system was and continues to be. Despite efforts of the NAACP and other civil rights organizations, congressional hearings during the Nixon administration, and antiracist activism of the 21st century, the problems fomented after Brown persist. The book draws the line from the past injustices to problems that the educational system grapples with today: not simply the underrepresentation of Black teachers and principals, but also salary reductions, teacher shortages, and systemic inequality.

By engaging with the complicated legacy of the Brown decision, Fenwick illuminates a crucial chapter in education history. She also offers policy prescriptions aimed at correcting the course of US education, supporting educators, and improving workforce quality and diversity.

A former Visiting Fellow and Visiting Scholar at Harvard University, she has worked in every sector of American education—as a preK–12 schoolteacher and administrator in urban public and private schools; university faculty member and administrator; foundation program officer; nonprofit board member; and legislative aid in the State of Ohio Senate. In 2020, she
was a candidate for US Secretary of Education.

Her widely disseminated research and opinion-editorials about education equity, leadership, and workforce diversity have appeared and been cited in the New York Times, Washington Post, and Education Week. She has been an invited speaker at the National Press Club and has appeared on CNN and C-SPAN discussing education equity and workforce development.

Fenwick is one of eleven members of the Scholarly Advisory Committee (SAC) for the Smithsonian National Museum of African American History and Culture—the world’s third busiest museum. The SAC was established by noted historian Dr. John Hope Franklin to help set the museum’s intellectual agenda and exhibition content.

She is cofounder of the Urban Superintendents Academy at the American Association of School Administrators and a consultant to CEO Action for Racial Equity founded by Tim Ryan, US Chairman and Senior Partner, PwC. Since 2017, she has held an appointment as a McDonald Character Leadership Conference Senior Fellow at the US Military Academy at West Point, where she occasionally lectures about character leadership.

She earned a PhD in education policy at The Ohio State University, where she was a Flesher Fellow, and a BS degree in elementary education at the University of Virginia.