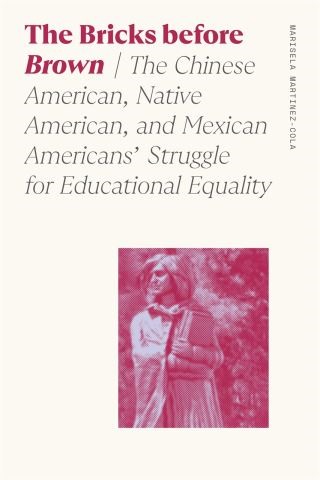 The Bricks before Brown

In 1954 the U.S. Supreme Court ruled that state laws establishing racial segregation are unconstitutional, declaring “separate is inherently unequal.” Known as a seminal Supreme Court case and civil rights victory, Brown v. Board of Education resulted from many legal battles that predicated its existence. Marisela Martinez-Cola writes about the many important cases that led to the culmination of Brown. She reveals that the road to Brown is lined with “bricks” representing at least one hundred other families who legally challenged segregated schooling in state and federal courts across the country, eleven of which involved Chinese American, Native American, and Mexican American plaintiffs.

By revealing the significance of Chinese American, Native American, and Mexican American segregation cases, Martinez-Cola provides an opportunity for an increasingly diverse America to be fully invested in the complete grand narrative of the civil rights movement. To illustrate the evolution of these cases, she focuses on three court cases from California, including these stories as part of the “long civil rights movement,” and thus expands our understanding of the scope of that movement along racial, gender, and class lines. Comparing and discussing the meaning of the other court cases that led to the Brown decision strengthens the standing of Brown while revealing all the twists and turns inherent in the struggle for equality.

Marisela Martinez-Cola: MARISELA MARTINEZ-COLA is an assistant professor of sociology at Morehouse College She has published in the Journal of Law & Society, Sociology of Race and Ethnicity, Teaching Sociology, Latino Studies, Understanding and Dismantling Privilege, and Humanity and Society. She lives in Atlanta, Georgia.