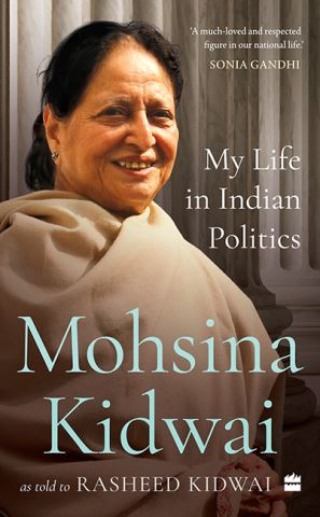 My Life In Indian Politics

Mohsina Kidwai has been in public life as a member of the Indian National Congress for over six decades. A cabinet minister in several successive central governments and a senior office-holder in the Congress, she has had a ringside view of Indian politics for almost the entire span of independent India's existence. She has witnessed, and been a participant in, the tenures of prime ministers from Jawaharlal Nehru to Indira Gandhi and Rajiv Gandhi, and was a member of parliament until 2016, one of only twenty Muslim women to have been elected to the Lok Sabha since 1951.

In this candid account of her life, Kidwai assesses not just her own contribution to public life, but also provides an honest appraisal of the turn in fortunes of the political party she has remained a loyal member of. The reader is treated to rare glimpses into the homes, lives and the hurly-burly of election campaigns over the decades. One such memorable one was the Azamgarh bypoll in 1978, which Kidwai won as Uttar Pradesh Congress chief, and which signalled a revival of the Congress's fortune after its spectacular defeat in the post-Emergency general elections of 1977. Written with the honesty and simplicity that have been her trademark in public life, this then is not just the memoir of a politician; it is an assessment of an entire era in Indian politics.

Mohsina Kidwai is a leader of Indian National Congress. From Barabanki in Uttar Pradesh, she has been a member of the Lok Sabha and the Rajya Sabha, as well as holding several offices in the Congress Working Committee (CWC) as well as the All India Congress Committee (A.I.C.C.). In the 1970s and 1980s, she served as union cabinet minister in several ministeries including health and family welfare, transport, urban development and tourism.

Rasheed Kidwai is a journalist, author, columnist and political analyst. He is a visiting fellow with the Observer Research Foundation (ORF). A former associate editor of the Telegraph, he is a graduate from St Stephen's College, New Delhi, and holds a Master's degree in mass communications from the University of Leicester, United Kingdom. He also contributes to numerous television channels, including CNN-News18, ABP News, NDTV, India Ahead News and India Today TV.