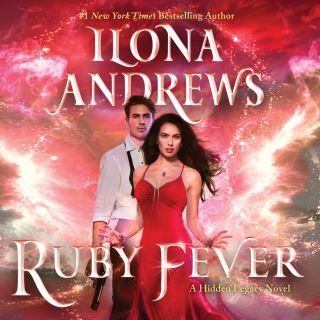 An escaped spider, the unexpected arrival of an Imperial Russian Prince, the senseless assassination of a powerful figure, a shocking attack on the supposedly invincible Warden of Texas, Catalina’s boss... And it’s only Monday.

Within hours, the fate of Houston—not to mention the House of Baylor—now rests on Catalina, who will have to harness her powers as never before. But even with her fellow Prime and fiancé Alessandro Sagredo by her side, she may not be able to expose who’s responsible before all hell really breaks loose.

“Ilona Andrews” is the pseudonym for a husband-and-wife writing team. Ilona is a native-born Russian, and Gordon is a former communications sergeant in the U.S. Army. Contrary to popular belief, Gordon was never an intelligence officer with a license to kill, and Ilona was never the mysterious Russian spy who seduced him. They met in college, in English Composition 101, where Ilona got a better grade. (Gordon is still sore about that.) They have co-authored four New York Times and USA Today bestselling series: the urban fantasy of Kate Daniels, rustic fantasy of the Edge, paranormal romance of Hidden Legacy, and Innkeeper Chronicles. They live in Texas with their two children and many dogs and cats.