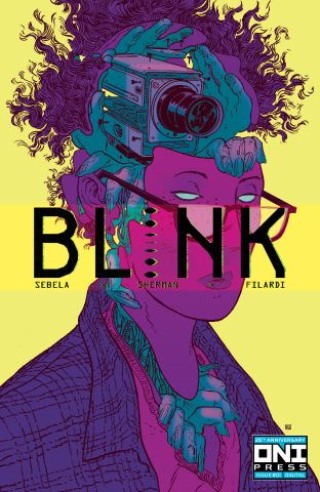 "Wren Booker was three when she was found catatonic and covered in blood on the streets of New York. Since that day, she’s been haunted by a childhood she can't remember. After decades of searching, Wren stumbles upon a cryptic website streaming multiple CCT feeds from strange rooms in a ruined building and something clicks, setting off hidden memories that lead her back to a place she’s seen in lifelong nightmares. Hunting for answers, Wren breaks into the building, but instead finds herself entangled in the camera-filled dark mazes of a decayed social experiment known only as BLINK.  Eisner-nominated Christopher Sebela (Dirtbag Rapture), Hayden Sherman (Thumbs), and Nick Filardi (Rogue Planet) team up for a found-footage horror where uncovering your past will leave you trapped inside it.  "

Christopher Sebela: Christopher Sebela is a four-time Eisner-nominated writer, designer, and publisher. He’s the co-creator of Crowded, Dead Dudes, Test, Heartthrob, and Shanghai Red, among others. He puts out his weirder work himself via a tiny publishing empire called Two Headed Press. Go see him at www.christophersebela.com