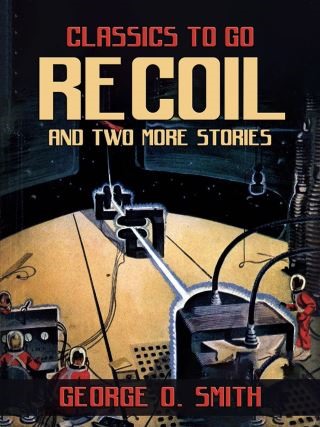 Excerpt: "Walter Franks sat in the director's office; his feet on the director's desk. He was smoking one of the director's cigarettes. He was drinking the director's liquor, filched shamelessly from the director's private filing cabinet where it reposed in the drawer marked "S." Drawer "B" would have given beer, but Walt preferred Scotch. He leaned forward and tossed the director's cigarette into the director's wastebasket and then he pressed the button on the desk and looked up. But it was not the director's secretary who entered. It was his own, but that did not disturb Franks. He knew that the director's secretary was off on Mars enjoying a honeymoon with the director. Jeanne entered and smiled. "Must you call me in here to witness you wasting the company's time?" she asked in mock anger. "Now look, Jeanne, this is what Channing does." "No dice. You can't behave as Don Channing behaves. The reason is my husband." "I didn't call to have you sit on my lap. I want to know if the mail is in." "I thought so," she said. "And so I brought it in with me. Anything more?" "Not until you get a divorce," laughed Franks. "You should live so long," she said with a smile. She stuck her tongue out at him."

George O. Smith: George Oliver Smith (April 9, 1911 – May 27, 1981) (also known by the pseudonym Wesley Long) was an American science fiction author. He is not to be confused with George H. Smith, another American science fiction author. Smith was an active contributor to Astounding Science Fiction during the Golden Age of Science Fiction in the 1940s.