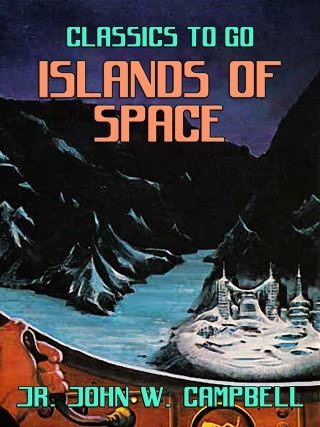 Islands of Space is a science fiction novel by American writer John W. Campbell Jr. It was first published in book form in 1957 by Fantasy Press in an edition of 1,417 copies. The novel originally appeared in the magazine Amazing Stories Quarterly. A paperback edition was published by Ace Books in 1966. In 1973, Islands was included in a Doubleday omnibus of all three "Arcot, Wade, and Morey" novels. A German translation appeared in 1967 as Kosmische Kreuzfahrt, and an Italian translation was published in 1976 as Isole nello spazio.

Jr. John W. Campbell: John Wood Campbell Jr. (June 8, 1910 – July 11, 1971) was an American science fiction writer and editor. He was editor of Astounding Science Fiction (later called Analog Science Fiction and Fact) from late 1937 until his death and was part of the Golden Age of Science Fiction. Campbell wrote super-science space opera under his own name and stories under his primary pseudonym, Don A. Stuart. Campbell also used the pen names Karl Van Kampen and Arthur McCann. His novella Who Goes There? was adapted as the films The Thing from Another World (1951), The Thing (1982), and The Thing (2011).