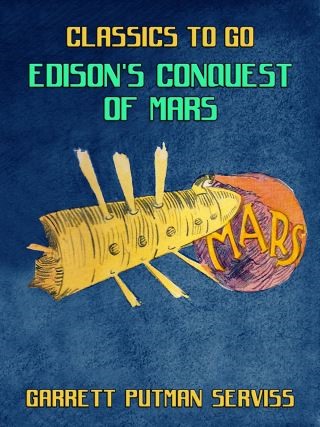 Following in the footsteps of one of the greatest science fiction masterpieces ever written, this long-forgotten sequel to "The War of the Worlds" boasts Thomas Edison as its hero. Originally published in the late 1800s, this is one of the rarest and most important cornerstones of the science fiction genre. Turning the original Wells tale on its head, this novel weaves a distinct and astonishing story of humans invading Mars, marking the invention of the space techno-thriller. Presenting a cornucopia of technical ingenuity, this edition marks a variety of firsts in the genre: the first space battle ever to appear in print, the original fictional example of alien abduction, the introduction of the theory that the pyramids were constructed by extraterrestrials, and the first truly functional spacesuits. (Goodreads)

Garrett Putman Serviss: Garrett Putnam Serviss (March 24, 1851 – May 25, 1929) was an American astronomer, populariser of astronomy, and early science fiction writer. Serviss' favourite topic was astronomy, and of the fifteen books he wrote, eight are devoted to it. He unquestionably was more widely read by the public on that topic than anyone prior to his time.