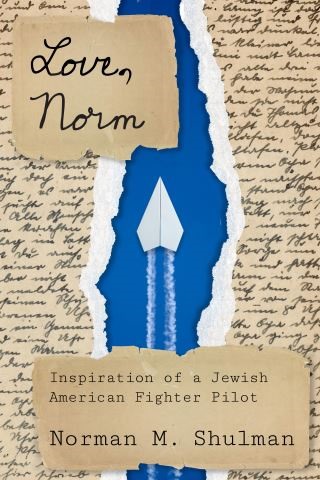 Norm Shulman’s relationship with his stepson Greg Levenson had always been stable and warm, but it altered when Greg decided to enlist in the Air Force at age 27. This unexpected decision brought them even closer together, and Norm came to realize that his whole family history had much support to offer Greg.

Cognizant of past anti-Semitic stereotypes persisting about Jewish participation in the military, Norm wanted to help prepare Greg to feel comfortable in his own identity. So, Norm decided to write letters that connected Greg to the many Jewish military heroes who had preceded him. From Judah Maccabee to fighter pilots from today’s recent history, these profiles in courage and heroism brought Greg foundation and strength, and they offer readers a breadth of knowledge from every corner of Jewish history.

Norm’s letters to Greg make up one core of Love, Norm; the other is Norm’s own multigenerational story of Jewish military heroes. As the son of Jewish immigrants whose place in America was hard-won, Norm chronicles what it was like to feel his identity pulled in different directions and how to hold fast to it nonetheless.

Love, Norm is a multifaceted retelling of inspirational profiles of famous Jewish fighters from across history, and it is also the singular story of how one man dug into his own past and found pieces to preserve his Jewish identity. Together, empathetically channeled through his heartfelt letters and remembrances, Love, Norm shares a collected wisdom with the next generation.

Norman M. Shulman: Norman M. Shulman has been a psychologist in both public and private sectors since 1975. Dr. Shulman has specialized in trauma interventions and family therapy. His avid interest in history, particularly Jewish military history, contributed to the development of this book. He maintains a private practice in Lubbock, Texas, where he lives with his wife.