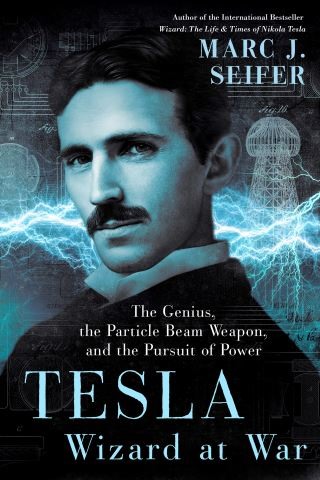 The Genius, the Particle Beam Weapon, and the Pursuit of Power

In this revelatory new book, the author of the award-winning international bestseller Wizard: The Life & Times of Nikola Tesla delves deeper into the groundbreaking ideas and astonishing mind of one of the greatest geniuses of modern times . . .

“In a few years hence, it will be possible for nations to fight without armies, ships or guns, by weapons far more terrible to the destructive action and range of which there is virtually no limit. Any city at any distance whatsoever from the enemy can be destroyed by him and no power on Earth can stop him from doing so.” —Nikola Tesla, circa 1925

From Tesla’s role in the origins of Star Wars technology and his dynamic theory of gravity, to the real purpose behind the iconic tower at Wardenclyffe, this is an eye-opening account of Tesla’s projects, passions, and ambitions—and an illuminating, important study of one of history’s most intriguing figures.

Marc Seifer: A graduate of the University of Chicago and Saybrook University, Marc J. Seifer, Ph.D., is a retired psychology teacher from Roger Williams University. A handwriting expert who has testified in state and federal court, Dr. Seifer has lectured at West Point Military Academy, Brandeis University, the United Nations, the Open Center in New York, LucasFilms Industrial Light & Magic, at Oxford University and Cambridge University in England, and at conferences in Canada, Israel and Croatia and for the Serbian Academy of Sciences.   His articles have appeared in Wired, Civilization, The Historian, Psychiatric Clinics of North America and Cerebrum. Featured in The New York Times, The Washington Post, The Wall Street Journal, The Economist and Scientific American, Dr. Seifer has also appeared on Coast to Coast Radio, NPR’s “All Things Considered,” “The Morning Show” in Canberra Australia, on the BBC, and on TV on American Experience, The History Channel, and Associated Press International.   Listed in Marquis’ Who’s Who in the World, he is also the author of the novels Rasputin’s Nephew, Doppelgänger, Crystal Night, and Fate Line, and the non-fiction works Transcending the Speed of Light, The Definitive Book of Handwriting Analysis, and Framed! Murder, Corruption & a Death Sentence in Florida. His book Wizard: The Life & Times of Nikola Tesla has been translated into nine languages including Serbian, Russian and Chinese.