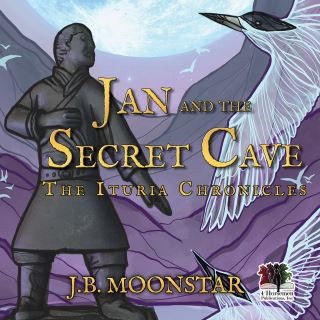 Jan and the Secret Cave

"No time to explain – they will see you, now run!”
Learning that an expedition was studying a group of endangered terns, Jan joined the group with her father, to help him with his research and see if she could do anything to protect them. While at the nesting site on the cliffs, she finds a small silk bag in a cave, and so starts an adventure with many unexpected surprises.
When she learns poachers have stolen many tern eggs, she is determined to rescue them, and with a little help, to transport them, along with their parents, to Ituria’s Island where they will be safe. But what chance does a young girl have against a band of poachers?

J.B. Moonstar: J.B. moved to Florida in her early teens and has lived there ever since, enjoying the mild weather and abundance of wildlife. She even spent several seasons raising orphan squirrels. She graduated from the University of Central Florida and has spent her working career in the legal profession. Her novels are inspired by her family and nature, as well as her need to escape from the real world once in a while.