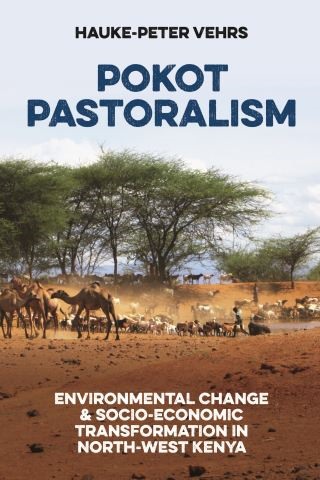 In East Africa and beyond, pastoral groups find themselves and their livelihoods under increasing threat when dealing with rapid environmental change. On the one hand, they contemplate major upheaval as a result of landscape and climate change on a scale never seen before. At the same time, these often-marginalised groups find themselves subsumed by the wider interests of national political economies prioritising new investment in land as well as encouraging tourism. This book investigates one such group - the nomadic pastoralists in East Pokot in north-west Kenya - and traces their social and ecological transformation over the past two hundred years to show how modern challenges are linked to the past history and also shape the perceptions of pastoral futures.
In East Pokot the grass bush savannah upon which the pastoral lifestyle depends has strongly declined over a long period of time, with encroachment of acacia. Though traditionally cattle-rearing, its people have been forced to diversify into raising other browsing animals as well as cattle husbandry. The development efforts of the Kenyan government to use natural resources have also threatened their environment and their way of life. Bringing a long view to the history of human-environmental relations, the author reveals a more complex picture of change that, contrary to earlier assumptions, is not due exclusively to the pastoralists' pasture management, but also to the extinction of wildlife populations in the region, which were hunted heavily in colonial times. Attempts to move beyond Pokot territory, to the regions west of Lake Baringo and to the hard-fought Laikipia Plateau, have often been compromised by violent conflicts. While a younger generation looks to develop new sources of income through the job opportunities created by geothermal energy production, and diversify into other agricultural activities, this has also brought a dynamic social transformation: increasing production and sale of alcohol, decreasingly nomadic lifestyle, growing differences between the older and younger generations, and so on. Contributing to debates on future rural Africa, ecological history and environmental change, the book will appeal to anthropologists, sociologists, geographers, historians and development scholars.

Hauke-Peter Vehrs: HAUKE-PETER VEHRS is a Post-doctoral researcher in the project 'Future Rural Africa: Future-Making and Social Ecological Transformation' at the University of Cologne.