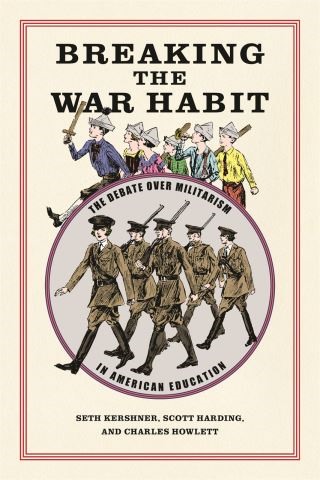 The Debate over Militarism in American Education

The Pentagon currently spends around $1.4 billion per year on recruiting and hundreds of millions annually on other marketing initiatives intended to convince the public to enlist—costly efforts to ensure a steady stream of new soldiers. The most important part of this effort is the Pentagon’s decades-long drive to win over the teenage mind by establishing a beachhead in American high schools and colleges.

Breaking the War Habit provides an original consideration of the militarization of schools in the United States and explores the prolonged battle to prevent the military from infiltrating and influencing public education. Focused on the Junior Reserve
Officer Training Corps (JROTC) in high schools and the Reserve Officer Training Corps (ROTC) in higher education, the authors expose the pervasive influence and economic leverage bestowed on the military as it recruits children and youth.

Breaking the War Habit highlights those who have resisted the privileged status of the military and successfully challenged its position on campuses across the country. A “scrappy band of activists,” the Committee on Militarism in Education (CME) initiated this work following World War I, publicizing the rise of school militarism and its implications. For two decades, CME’s activism shaped public debate over the meaning of militarism in U.S. society and education settings, resulting in numerous victories against ROTC and JROTC programs. The authors also explore how, since the mid-1970s, military “counter-recruiters” have contested military recruiters’ largely unchecked access to high school students, raising awareness of a “school-to-military pipeline” that concentrates recruitment in urban (predominantly Black and low-income) regions.