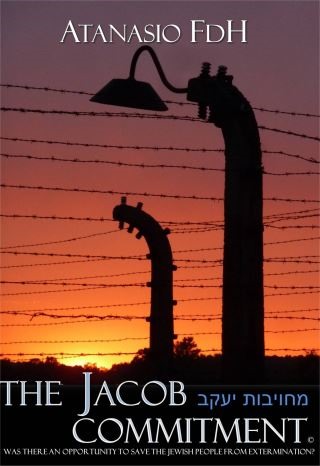 The plan to save 2 million jews from extermination

THE JACOB COMMITMENT by Atanasio FdH
Was there really an opportunity to save the Jewish people from extermination?
Holocaust ... the word alone is chilling.
A word capable of evoking terrifying images of gas chambers, sinister uniforms with skulls and hundreds of human bodies burning in crematoria ovens. And in the end, a number, a terrible figure, a dreadful toll of six million souls.
During that criminal darkness there were some memorable actions, flashes of humanity that saved a few from death. And it is precisely those isolated cases that lead us to a disturbing question: if it was possible to save a few thousand ... how many more could have lived? Was there really a chance to save the Jewish people from extermination?
"The Jacob Commitment" tells of the second mission of Simon de Haro, the Jesuit of the Holy Alliance, the Vatican Secret Service, who will risk his life in a desperate attempt to reach an agreement between the Third Reich, the Allies, and the International Jewish Community; a compromise to safeguard the lives of the Jews of Europe.
He will perish before the horror of Auschwitz, and only a Jewish woman, Hannah Kozlova, will be able to bring him back to life.

Atanasio FdH: Atanasio FdH was born in Málaga in 1975. He studied at the Jesuit school of St. Stanislaus Kostka and at the Universities of Seville and Malaga, where he graduated in Engineering. He travels as much as he can, reads and writes, almost always about the subject he is passionate about: the Second World War.
He is the author of "The Kassandra Plan" and "The Jacob Commitment", the first two installments of the World War II saga about the Jesuit spy Simon de Haro.
He currently directs a charitable foundation for the construction of orphanages and schools in India and is finishing the third novel of the trilogy, "Wounded Wolf".