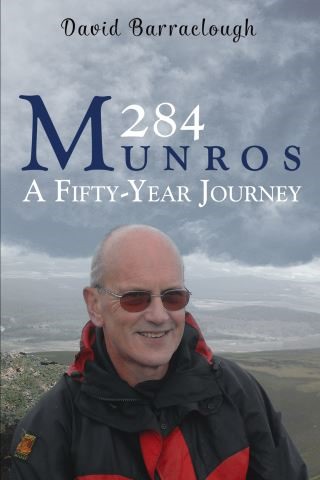 Since the Rev A E Robertson first accomplished the feat in 1901, over 6,500 people have registered their “compleation” of the Munros with the Scottish Mountaineering Club. There are records for the fastest round; for “compleating” in a continuous walk, or in a single season; for the greatest number of rounds; etc.
David Barraclough took a more leisurely approach, taking 51 years and 164 days to walk 2,086 miles and climb 690,000 feet between ascents of Sgùrr nan Gillean, his first Munro climbed when he was fourteen, and Beinn Dòrain, his 284th. David’s book is more than a diary of his achievement. He includes descriptions of the often non-standard routes he took to the summits and tries to rationalise the many changes that have been made to the Munro listings over the years. Beyond the mountains themselves, he discusses the effects on both access and the environment of the dams and enlarged lochs associated with hydro-electric power schemes, and the more recent threat to the wildness of Scotland’s more remote areas from industrial-scale wind farms. Throughout the book, David’s lifelong love of the Scottish mountains shines through.

David Barraclough: David Barraclough is a Yorkshireman. Born and bred in the West Riding. He was exiled on Tyneside for over forty years before returning to his native county eleven years ago. He climbed his first Munro – Skye’s Sgùrr nan Gillean – at the age of fourteen, while on a school youth hostelling trip which marked the start of his love affair with Scotland’s mountains, but not the birth of an ambition to climb all the Munros. That came some time later, but the competing demands of family life and a busy professional career meant it was over fifty years before he “compleated” his Munro round on Beinn Dòrain in 2010.