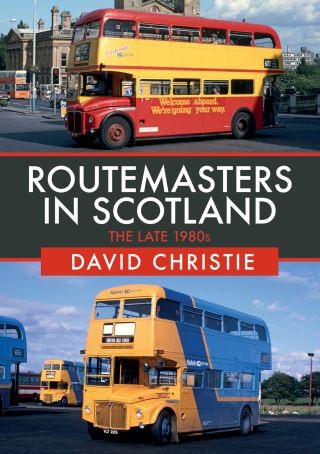 The deregulation of the bus industry in 1986 led to the formation of new bus companies in Central Scotland such as Clydeside, Kelvin, Strathtay and Magicbus (Stagecoach). These companies seem to have hit on the idea to use redundant London Routemasters and to provide conductors to speed up services.During the next few years these were a common sight in Glasgow, Perth and Dundee and were duly recorded by the author. Some 240-odd operational RMs were involved, with over fifty additional vehicles for use for spares. Most of the buses received a complete repaint by LT before being delivered to Scotland – and the new liveries were a sight to behold! This ‘invasion’ didn’t last for long, though, and all this came to an end in 1990–2.

David Christie: Born in Romford, Essex, in 1943, David Christie began photographing transport in 1962 when he decided to capture the final days of steam on Britain’s rail network. He also recorded buses, especially around London, before moving to Scotland, where he still lives today.