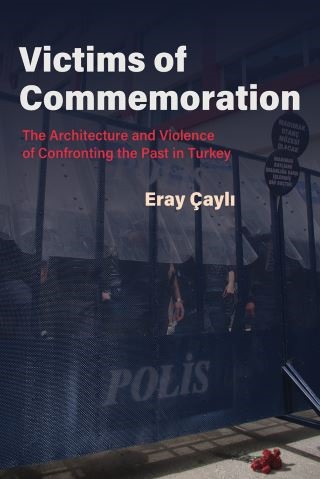 The Architecture and Violence of Confronting the Past in Turkey

"Confronting the past" has become a byword for democratization. How societies and governments commemorate their violent pasts is often appraised as a litmus test of their democratization claims. Regardless of how critical such appraisals may be, they tend to share a fundamental assumption: commemoration, as a symbol of democratization, is ontologically distinct from violence. The pitfalls of this assumption have been nowhere more evident than in Turkey whose mainstream image on the world stage has rapidly descended from a regional beacon of democracy to a hotbed of violence within the space of a few recent years.

In Victims of Commemoration, Eray Çayli draws upon extensive fieldwork he conducted in the prelude to the mid-2010s when Turkey’s global image fell from grace. This ethnography—the first of its kind—explores both activist and official commemorations at sites of state-endorsed violence in Turkey that have become the subject of campaigns for memorial museums. Reversing the methodological trajectory of existing accounts, Çayli works from the politics of urban and architectural space to grasp ethnic, religious, and ideological marginalization.

Victims of Commemoration reveals that, whether campaigns for memorial museums bear fruit or not, architecture helps communities concentrate their political work against systemic problems. Sites significant to Kurdish, Alevi, and revolutionary-leftist struggles for memory and justice prompt activists to file petitions and lawsuits, organize protests, and build new political communities. In doing so, activists not only uphold the legacy of victims but also reject the identity of a passive victimhood being imposed on them. They challenge not only the ways specific violent pasts and their victims are represented, but also the structural violence which underpins deep-seated approaches to nationhood, publicness and truth, and which itself is a source of victimhood. Victims of Commemoration complicates our tendency to presume that violence ends where commemoration begins and that architecture’s role in both is reducible to a question of symbolism.

Eray Çayli: Eray Çayli is the Leverhulme Trust Early Career Fellow at the European Institute at the London School of Economics.