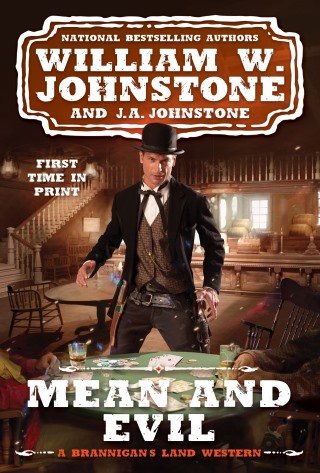 The national bestselling western authors William W. Johnstone and J.A. Johnstone bring us another Ty Brannigan western with a unique and American brand of justice.

Ex-lawman turned cattle rancher Ty Brannigan loves his wife and children. And may Lord have mercy on those who would harm them—because Ty Brannigan will show none.

No one knows their way around a faro table, bank vault, or six shooter more than Smilin’ Doc Ford. When he’s not gambling or thieving, he’s throwing lead—or, if he’s feeling especially vicious, slitting throats with his Arkansas toothpick. Roaming the west with Doc is a band of wild outlaws including a pair of hate-filled ex-cons and the voluptuous Zenobia “Zee” Swallow, Doc’s kill-crazy lady.

The gang have been on a killing spree, leaving a trail of bodies near Ty Brannigan’s Powderhorn spread in Wyoming’s Bear Paw Mountains. U.S. marshals want Ty to help them track down Smilin’ Doc’s bunch. But when the hunt puts the Brannigan clan in the outlaws’ sights, Ty and his kin take justice into their own hands—and deliver it with a furious, final vengeance.

William W. Johnstone:
William W. Johnstone is the New York Times and USA Today bestselling author of over 300 books, including the series THE MOUNTAIN MAN; PREACHER, THE FIRST MOUNTAIN MAN; MACCALLISTER; LUKE JENSEN, BOUNTY HUNTER; FLINTLOCK; THOSE JENSEN BOYS; THE FRONTIERSMAN; THE LEGEND OF PERLEY GATES, THE CHUCKWAGON TRAIL, FIRESTICK, SAWBONES, and WILL TANNER: DEPUTY U.S. MARSHAL. His thrillers include BLACK FRIDAY, TYRANNY, STAND YOUR GROUND, THE DOOMSDAY BUNKER, and TRIGGER WARNING. Visit his website at www.williamjohnstone.net or email him at dogcia2006@aol.com.
|||
Being the all-around assistant, typist, researcher, and fact checker to one of the most popular western authors of all time, J.A. Johnstone learned from the master, Uncle William W. Johnstone.

“Every day with Bill was an adventure story in itself. Bill taught me all he could about the art of storytelling. ‘Keep the historical facts accurate,’ he would say. ‘Remember the readers, and as your grandfather once told me, I am telling you now: be the best J.A. Johnstone you can be.’”