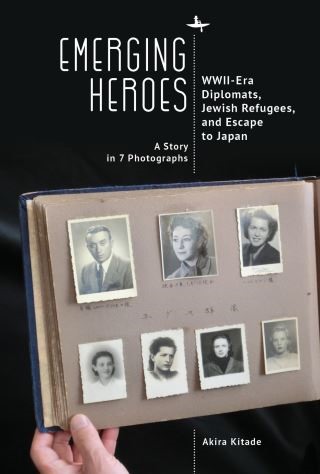 Inspired by seven photographs of WWII refugees in an old album, the author embarked on a quest to uncover the story behind each portrait. Had the refugees been rescued by the diplomat Chiune Sugihara, who saved thousands of Jews from the Holocaust by providing Japanese transit visas? Searching for the identities of the people in the photographs, the author scoured historical records and interviewed numerous fascinating individuals, including Sugihara visa recipients and their descendants. While solving the mystery of the people in the photographs, the author uncovered more hero diplomats and new details about Sugihara visas. This account of the author’s investigation supports the legacy of Chiune Sugihara and highlights other WWII saviors, such as the Dutch diplomat Jan Zwartendijk.

Akira Kitade: Akira Kitade received a BA in French Literature from Keio University in 1966. Between 1966 and 2004, he worked for the Japan National Tourism Organization (JNTO) and was stationed in Geneva, Dallas, and Seoul. Kitade retired from JNTO in 2004. Since then, he has published several books, including "Visas of Life and the Epic Journey" (2014). He received a 2017 Foreign Minister Commendation for the promotion of mutual understanding between Japan and Jewish society.