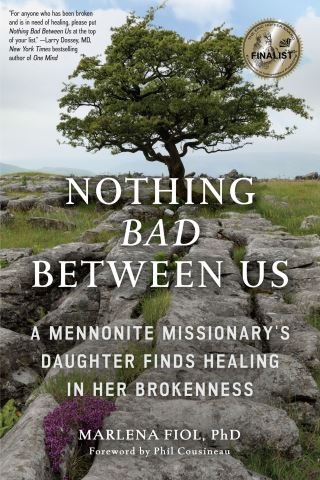 Nothing Bad Between Us

A Mennonite Missionary's Daughter Finds Healing in Her Brokenness

One woman’s story of survival from an abusive upbringing in a close-knit Mennonite community and her journey to forgiveness and reconciliation.

Marlena’s childhood in Paraguay was full of contradictions. Her father was both a heroic doctor treating patients with leprosy, and an abusive parent. Her Mennonite missionary community was both a devoted tribe and a controlling society. And Marlena longed both to be accepted and to escape to somewhere new. Then she was publicly humiliated . . .

In Nothing Bad Between Us, follow Marlena as she takes control of her life and learns to be her authentic self, scars and imperfections included. This memoir is a story of brokenness and eventual redemption that taps into our collective yearning for healing and forgiveness.

Praise for Nothing Bad Between Us

“Riveting and spellbinding . . . A true story of healing, deep reflection, raw emotion, and triumph. Marlena has been able to see through her own pain in order to encourage and help bring healing to others. Highly recommended.” —Misty Griffin, author of Tears of the Silenced: An Amish True Crime Memoir of Childhood Sexual Abuse, Brutal Betrayal, and Ultimate Survival

“I found enormous inspiration and encouragement in this beautifully written account. This book could have been written only by someone possessed of uncommon love, compassion, and empathy. For anyone who has been broken and is in need of healing, please put Nothing Bad Between Us at the top of your list.” —Larry Dossey, MD, New York Times–bestselling author of One Mind: How Our Individual Mind Is Part of a Greater Consciousness and Why It Matters

Marlena Fiol: Marlena Fiol, PhD, is the author of the inspiring memoir Nothing Bad Between Us. Her book is a narrative exploration of her own identity journey from a tortured and rebellious childhood as a Mennonite missionary kid on a leprosy compound to eventual reconciliation with her people and within herself. Marlena has written dozens of articles exploring the themes of loss, suffering, healing, learning, love, redemption, and reconciliation. Before becoming a writer of literary essays and blogs, she received worldwide acclaim for her work on learning and identity. This work examined how people within and around organizations make sense of who they are in relation to others, and how that sense of self can change.

Marlena and her husband Ed find both light playfulness and intense joy in their relationships with their grandchildren. They currently spend summers in lush, green Oregon and winters in sunny Arizona. You can learn more about Marlena and her work at marlenafiol.com.

Phil Cousineau is an award-winning writer and filmmaker, teacher and editor, lecturer, storyteller and TV host. With more than thirty-five books translated into more than ten languages and 15 scriptwriting credits to his name, Cousineau has also appeared alongside mentors Joseph Campbell and Huston Smith. He is co-writer and host of Global Spirit and has also appeared on CNN, The Discovery Channel, NFL Films, and more. He has been interviewed for stories in Time, Newsweek, and The New York Times.

Currently, Cousineau lives with his family in North Beach in San Francisco, California. Learn more about his work at http://www.philcousineau.net.