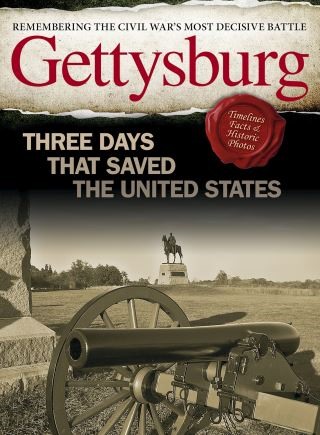 Packed with facts, stories, and illustrations, a guide to the historic Pennsylvania battle that marked a turning point in the American Civil War.

From the first shots fired at 7:30 a.m. on July 1, 1863 in a field west of Gettysburg to Robert E. Lee’s losing gamble known as Pickett’s Charge on July 3, just fifty-five hours later, Gettysburg is a snapshot of three of the most important days in US history.

Editor Ben Nussbaum has compiled a fascinating retelling of political, military, and social conditions that thrust the sleepy town of Gettysburg forever into the pages of history books. In addition to informative timelines and fact sheets of the battle of Gettysburg and the Civil War, this handsomely illustrated volume also captures the human stories—of Father Corby and the Irish Brigade; Amos Humiston, the unidentified father who died in battle clutching a photograph of his three children; the eleven-year-old sergeant, John L. Clem, who killed a Confederate soldier; John Burns, the only civilian to fight in the battle; and Jubal Early, an unlikely general who “scared Abraham Lincoln like hell.”

Also included is the poignant story and photographs of a reunion fifty years later of fifty thousand Union and Confederate veterans, among them a man believed to be 112 years old, and a chapter focusing on a dozen significant monuments among Gettysburg’s numerous historic landmarks. In addition, a resource section offers readers and visitors ways to learn more about the Battle of Gettysburg, including books, websites, and games.

Ben Nussbaum has worked professionally as an editor in various book genres, from technical manuals such as Pilates For Dummies to children’s books featuring Winnie the Pooh and Elmo. His experience in magazines includes the launching of USA Today’s newsstand program for magazines, which offers magazines on topics ranging from women’s health and travel to fantasy football to US history, Hollywood movies and beyond. He lives in Arlington, Virginia, with his two daughters.