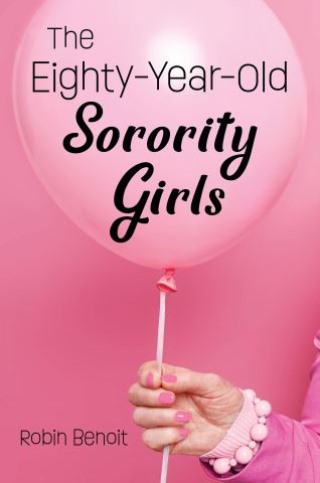 “A heart-warming story that celebrates the bonds of friends, family and sisterhood. This is a beautifully crafted novel.” —Kristina Seek, author of The Hashtag Hunt

As a group of eighty-something girlfriends deals with the mental decline of their sorority sister, they reconnect with their college sorority, advise their grandchildren, find new lives for themselves, and continue to show up for each other.

Vivian, nicknamed “Button,” is an Alzheimer’s patient who adores her sorority group. Helen rediscovers love at age eighty-one, Ida’s crazy side comes out during football season, and Laney is the “big sister” in charge of baking for the group. These three women consistently show up for Vivian as her mental health deteriorates—because that is what sisters do. As they discover a new way of life, they find they would rather take “the road less traveled,” just as they did in their college days.

“I love books that represent the values of female friendships and supporting one another. The way these women show up for each other is truly inspiring.” —Pat Mitchell, Co-Founder and Curator of TEDWomen and author of Becoming a Dangerous Woman

“I think fans of Steel Magnolias will love this book! I recommend it wholeheartedly!” —Carey Conley, coauthor of Keep Looking Up

“A truly endearing book . . . We all need our tribe, our pride and to think about our special relationships and their lifetime impact personally and on future generations.” —Robin White Fanning, President of the Phi Mu Foundation

“Sorority sister or not, this book is an incredible portrayal of sisterhood and friendship that will warm your heart.” —Kelin Kushin, Chief Business Development Officer at Vivid Vision

Robin Benoit: Yes, Robin Benoit is a sorority alumna and she would love for you to guess to which sisterhood she belongs after reading this book. There are a few clues, but also loving references to many National Panhellenic Conference sororities. She did not name her sorority nor create an imaginary one so that every sorority woman would feel it was written especially for her. No matter the letters, colors, emblems or creeds, this book is for all the sorority "girls" out there. Robin has served in officer positions for her sorority and Alumnae Panhellenic. She has said for many years that Thanksgiving at her home could be considered a Panhellenic meeting with the different sororities represented in her family. She graduated from college in 1985 with a degree in Journalism/Public Relations. She believes it was her sorority experience which led her to a career in public relations/community relations with non-profit agencies and corporations because she wanted her work to be meaningful and helpful to others. That desire to make a difference led her to become a writer. Robin is now a three-time author with two previous books under her belt. She wrote her first book in 2010 following the amazing success of her daughter Jillian's vision therapy treatment. Jillian's Story: How Vision Therapy Changed My Daughter's Life and second book co-written with her daughter in 2014, Dear Jillian: Vision Therapy Changed My Life Too, are found in many optometry offices around the world. The Eighty Year Old Sorority Girls is her foray into fiction writing, but it too grew from a desire to share her personal perspective of loving someone with Alzheimer's. Her mother, June, passed away in 2017 after struggling with the disease for several years. This story also blossomed into one about sorority sisterhood thanks to the examples of many special sisters in Robin's life. One constant thread these sisters shared was their belief that they were sorority girls at heart no matter their age, thus the title of this book. Robin lives in the Midwest with her husband, Brian, and they have two adult daughters, Annelise and Jillian. She loves to travel and credits her 1984 experience on Semester at Sea for creating the adventurer in her. She is a tremendous Disney fan and it will be obvious that Big Sky Amusement Park was inspired by that love. She also enjoys her bible study circle and can be found several days a week in her local YMCA's water aerobics class.