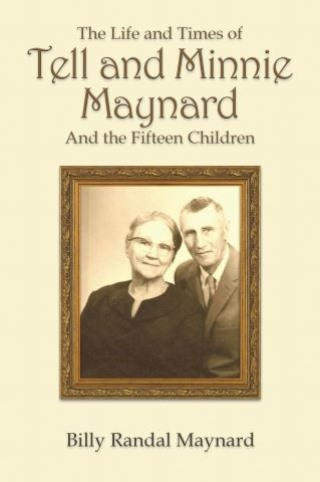 The title of the book sums it up fairly well with a couple of exceptions. “The Life and Times of Tell and Minnie Maynard and “the Fifteen Children” is several stories , using testimonials, written letters, and history to weave a wonderful narrative about some of the “last pioneers” on Brushy Creek of Pike Conty, Ky. See how they spent their days amidst the rolling hills of the countryside. There was a two-story house. There was a farm of 380 acres. A little church stood beside their home. A family cemetery began to grow from family members who left us too soon. This is the true story of a large family. This is my heritage. I felt compelled to tell their stories as they struggled to survive in this rugged territory. Wow - what a story it is! Meet the Maynards!

Billy Randall Maynard: Billy Randal Maynard was born and raised in Pikeville, Ky area. He is the son of William Lance Maynard (a son of Tell and Minnie Maynard). Billy’s mother was the late Lottie M. Maynard of Raccoon, Ky. Billy had One brother,’ Barry, deceased. Billy has five children, one with Patty. Billy and Patty presently live in Salyersville, Ky. Billy is Asst Pastor of Owsley FWB Church in Pikeville, Ky. Mr. Maynard is an accomplished author, having written “Interview With An Angel” as well as “Take the Road to Somewhere ( a collection of short stories and poems). Both written after “911” Event. Mr. Maynard received his college degree from “Pikeville College in 1974, and received his Masters’ degree from Morehead State University in 1998, both degrees are in Business Admin. Billy started in the automobile business with his father, William, then spent around 30 years in the Insurance business before retiring in 2016. Billy made it his mission to honor the Maynard family with this writing.