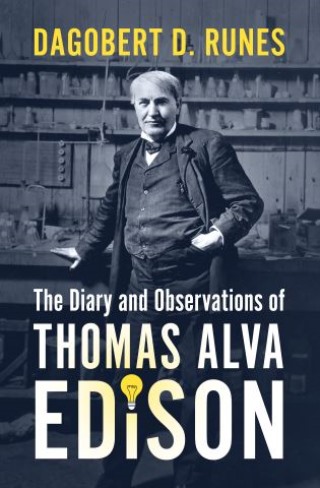 Gain insight into the unique thinking and philosophy of the world’s most prolific inventor with this collection of his writings.

American scientist and businessman Thomas Edison contributed much to the well-being and comfort of our modern life. He gave us the electric light, the phonograph, and the motion-picture camera, along with more than one thousand other inventions. Edison was, as fellow inventor Guglielmo Marconi put it, “one of the world’s greatest benefactors.”

In this volume, editor Dagobert D. Runes presents Edison’s diary along with a selection of his social and philosophical ideas taken from available notes, statements, and observations. Readers will discover that many of Edison’s casual remarks made decades ago have a definite contemporary significance. His propositions in ethics, philosophy, music, and education show a rare combination of whimsy and deep sincerity.

Dagobert D. Runes: Dagobert D. Runes was born in Zastavna, Bukovina, Austria-Hungary (now in Ukraine), and received a doctorate in philosophy from the University of Vienna in 1924. In 1926 he emigrated to the United States, where he became editor of the Modern Thinker and later Current Digest. From 1931 to 1934 he was director of the Institute for Advanced Education in New York City, and in 1941 he founded the Philosophical Library, a spiritual organization and publishing house.

Runes published an English translation of Karl Marx’s On the Jewish Question under the title A World Without Jews, featuring an introduction that was clearly antagonistic to extreme Marxism and “its materialism,” yet he did not entirely negate Marxist theory. He also edited several works presenting the ideas and history of philosophy to a general audience, including his Dictionary of Philosophy.