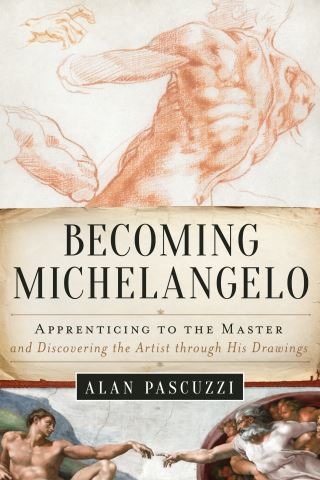 Apprenticing to the Master, and Discovering the Artist through His Drawings

A “remarkable inquiry into artistic creation…this revelatory book is a must for art students and those seeking new insights into [Michelangelo’s] art” (Kirkus).

Many believe Michelangelo's talent was miraculous and untrained, the product of “divine” genius. And while Michelangelo himself promoted this myth, the truth is that he painstakingly developed his craft over many years. Like any Renaissance apprentice, the young Michelangelo learned from a master, copying and experimenting with materials and styles.

In Becoming Michelangelo, Alan Pascuzzi recounts the young Michelangelo’s journey from student to master, using the artist’s drawings to chart his progress and offering unique insight into the true nature of his mastery. Pascuzzi himself is today a practicing artist in Florence, Michelangelo’s city. As an art history student, Pascuzzi “apprenticed” himself to Michelangelo by studying his extant drawings and coping them to discern his progression in technique, composition, and mastery of anatomy.

Pascuzzi’s narrative traces Michelangelo’s development as an artist during the period from roughly 1485, the start of his apprenticeship, to his completion of the Sistine Chapel ceiling in 1512. Analyzing Michelangelo’s burgeoning abilities through copies he himself executed in museums and galleries, Pascuzzi unlocks the transformation that made Michelangelo great. At the same time, he narrates his own transformation from student to artist as Michelangelo’s last apprentice.

Alan Pascuzzi: Alan Pascuzzi is a painter, sculptor, and professor of art history who received a Fulbright scholarship to travel to Florence and apprentice himself to Michelangelo. He copied all 135 of Michelangelo's extant drawings from the period covered in his book from originals in various museums. He has been teaching Renaissance art techniques to students for more than a decade. He has appeared in TV documentaries on Renaissance art, including the BBC's The Color Blue and Inside the Mind of Leonardo and on 60 Minutes. He lives in Florence.