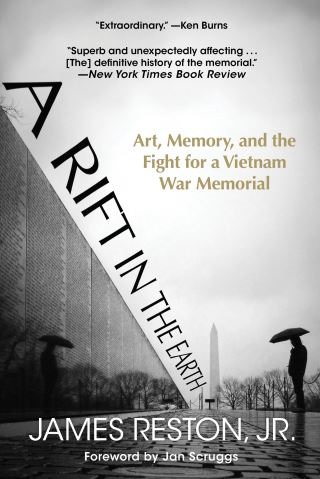 A Rift in the Earth

Art, Memory, and the Fight for a Vietnam War Memorial

An “absolutely fascinating” account of the ferocious five-year battle over the design of the Vietnam Veterans Memorial (James Fallows, The Atlantic).

A Rift in the Earth tells the remarkable story of the “art war” that took place between 1979 and 1984 over what kind of memorial should be built to honor the men and women who died in Vietnam. The story intertwines art, politics, historical memory, patriotism, racism, and a fascinating set of characters, from those who fought in the conflict to those who resisted it to politicians at the highest level.

At its center are two enduring figures: Maya Lin, a young Asian-American architecture student at Yale whose abstract design won the international competition but triggered a fierce backlash among powerful figures; and Frederick Hart, an innovative sculptor of humble origins on the cusp of stardom. James Reston, Jr., a veteran who lost a close friend in the war and has written incisively about the conflict's bitter aftermath, explores how the debate reignited passions around Vietnam long after the war’s end and raised questions about how best to honor those who fought and sacrificed in an ill-advised war. Richly illustrated with photographs from the era and design entries from the memorial competition, A Rift in the Earth is a “powerful” story of America’s not-so-distant past (Kirkus Reviews, starred review).

“Dramatically and incisively chronicles the ‘art war’ over the Vietnam Veterans Memorial that raged from 1979 to 1984, reopening the wounds of that tragic conflict . . . As current battles are waged over public statues honoring leaders of the Confederacy, Reston’s account of an earlier struggle over the art of remembrance offers a clarifying and affecting perspective.” —Booklist

“An absolutely fascinating account of the artistic, political, personal, and cultural tensions that arose from America's most divisive war, and that led to one the country’s greatest works of public art. I followed the controversy over the Vietnam Veterans memorial when it was underway, but I learned from almost every page of this book.” —James Fallows, The Atlantic

James Reston: James Reston, Jr. was an assistant to Secretary of the Interior Stewart Udall before serving in the US Army from 1965 to 1968. He is the bestselling author of seventeen books— including The Conviction of Richard Nixon: The Untold Story of the Frost/Nixon Interviews, which helped inspire the film Frost/Nixon (2008)— three plays, and numerous articles in The New Yorker, Vanity Fair, and the New York Times Magazine. He won the Prix Italia and Dupont-Columbus Award for his NPR radio documentary, Father Cares: The Last of Jonestown. He lives with his wife in Chevy Chase, Maryland.