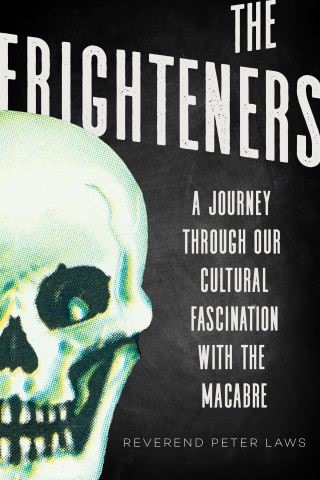 A Journey Through Our Cultural Fascination with the Macabre

For fans of Stiff by Mary Roach and Ghostland by Colin Dickey—an ordained minister seeks to uncover the reasons we are drawn to the morbid side of life.

The Frighteners is a bizarrely compelling, laugh-out-loud exploration of society’s fascination with the dark, spooky, and downright repellent, written by a man who went from horror-obsessed church hater to a God-fearing Christian, who then reconciled his love of the macabre with his new faith.

Laws takes us on a worldwide adventure to shine a light on the dark corners of our own minds. He meets the people who collect serial killers’ hair, spends a night in a haunted hotel, and has dinner with a woman who keeps her own coffin in her living room, ready for the big day. He’s chased by zombies through an underground nuclear bunker, hunts a supposed real-life werewolf through the city streets, and meets self-proclaimed vampires who drink actual blood.

From the corpse-packed crypts of Rome to the spooky streets of a Transylvanian night, he asks why he, and millions of other people, are drawn to ponder monsters, ghosts, death, and gore. And, in a world that worships rationality and points an accusing finger at violent video games and gruesome films, can a love of morbid culture actually give both adults and children safe ways to confront our mortality? Might it even have power to re-enchant our jaded world?

Grab your crucifixes, pack the silver bullets, and join the Sinister Minister on this celebratory romp through our morbid curiosities.

“This is not simply a defense of a genre that routinely comes under fire for its graphic violence; it’s an intelligent, perceptive, and very well written successor to Stephen King’s 1981 classic, Danse Macabre.” —Booklist

“A unique blend of personal experience, research, and humor...as entertaining, informative, and insightful as it is hilarious.” —Foreword Reviews

“Phrases like page-turner and tour-de-force are slapped on any old tome these days, but in this case, it is fully deserved. Truly the Bill Bryson of the horror think-piece, in literary terms, the highest honor this writer can bestow upon another.” —Starburst magazine

“Full of blood and guts and brains and heart, Peter Laws’s work is a fearless and ultimately emotional exploration for anyone who’s ever wondered why they were drawn to the macabre, and what it says about them.” —Mike Bockoven, author of Fantasticland and Pack

Peter Laws: Reverend Peter Laws is an ordained Baptist minister with a diploma in theology and a degree in sociology and applied social science from Lancaster University. His thesis, Preaching in the Dark: The Homiletics and Hermeneutics of Horror was shortlisted for a BIAPT--The British and Irish Association for Practical Theology Award. He writes articles for the online magazine The Fortean Times and hosts a YouTube show and podcast called Flicks the Church Forgot. He lives in Liverpool, United Kingdom.