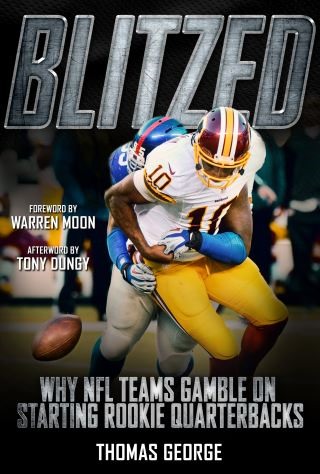 “A fascinating inside journey of the high-stakes risks and rewards of [quarterbacking], and how far teams will go to ride a young gunslinger to success.” —Mitch Albom, New York Times-bestselling author and Detroit Free Press sports columnist

In today’s NFL, there’s no time for rebuilding or down years. You need to compete each and every day, or else you’re out—and that goes for players, coaches, and front office. You either win today or you’re gone tomorrow.

Because of this trend, struggling teams have forgone the training of old and the practice of slowly building from the ground up in favor of the immediate payoff. And when it comes to gaining the interest of the fans and media, there’s one go-to decision for every struggling team: the rookie quarterback.

Blitzed is an in-depth study of why teams choose to hand the keys of their franchise over to an unproven rookie. But there are multiple layers as to the odds of success for these athletes. While much has to do with their mental and physical toughness, the coaching, front office, and state of an organization all play a crucial role. In recent NFL drafts, quarterbacks have been taken as the first two picks (Jameis Winston and Marcus Mariota in 2015; Jared Goff and Carson Wentz in 2016). The face of the franchise can’t grow a beard, but is expected to lead his team on the gridiron. Covering the history of this trend with a running timeline of the 2016 NFL season and top draft picks Goff and Wentz, as well as interviews with numerous current and former quarterbacks, coaches, and executives, distinguished journalist Thomas George breaks down how teams decide on starting a rookie quarterback and why the chances of an immediate payoff are such a mixed bag.

Thomas George: Thomas George is a distinguished journalist with over thirty-five years of experience. Known for his in-depth research, he has won numerous honors for his writing. Currently the national columnist at SBNation, he has been a columnist/writer at the Detroit Free Press, New York Times, Denver Post, AOL, NFL.com, NFL Magazine, and was the NFL Network's first managing editor. George lives in Fort Lee, New Jersey, with his wife Tamara and sons Anthony and Ely.