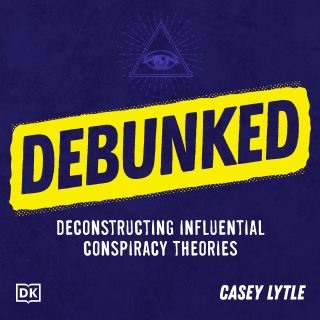 Separate the Rational from the Irrational in Influential Conspiracy Theories

Head down the rabbit hole and feed your fascination for conspiracy and controversy. Conspiracy theories-they're influential and spread to sometimes irrational extremes. Why do people cling to conspiracy theories so powerfully? Is there a way to separate the possible from the impossible? Yes. Enter: Debunked.

Conspiracy theories pop up surrounding every major national and global event-some are possible, some are not. TikTok influencer and psychology professor Casey Lytle will teach you how to be an intelligent consumer of "alternative" theories. Lytle's trademark "project management approach" will help you discern possible from impossible in the popular and controversial theories surrounding 10 national and global events.

9/11-No fewer than 10 alternative theories have gained traction. But let's evaluate: Did the Twin Towers really look like a controlled demolition? Would jet fuel have to melt steel for the towers to collapse? What would it take in hours and people to secretly plant enough explosives to bring the buildings down without being discovered, and without being set off by the impact and fires from the planes? All this and more in Chapter 7.

COVID-19-The vaccine implants a microchip used to track people; the fatality rate has been wildly inflated; oh, and Bill Gates is not only responsible for the virus but also the head of a plot to use the virus as population control.

School shooters-why are they so easy to explain, but so hard to predict? In what ways has the profile of a school shooter changed over the last 25 years, and what has caused those changes? Are school shootings a new phenomenon, or does the media simply make us more aware of them when they happen? The chapter will cover Sandy Hook conspiracy theories, as well as the psychology behind "truthers."

Casey Lytle: Casey Lytle (TikTok 315K), psychology and sociology professor, discusses the psychology of propaganda, media exaggeration, and discerning the viability of conspiracy theories—and how they are born. When Lytle, a current faculty member at Centralia College, first began teaching General Psychology, a frequent question he would get from students was “What causes people to believe in conspiracy theories, and why do some people get so aggressive in defending their beliefs?” The interest and excitement in the class over these questions eventually led to “Psychology of Conspiracy Beliefs” and Casey’s trademark strategic approach to evaluating these theories.