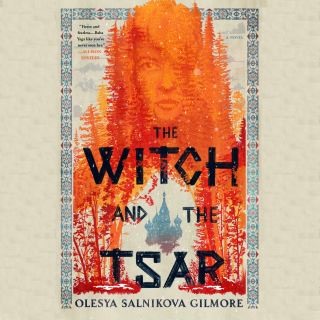 The Witch and the Tsar

"A delicate weaving of myth and history, The Witch and the Tsar breathes new life into stories you think you know."–Hannah Whitten, New York Times bestselling author of For the Wolf

In this stunning debut novel, the maligned and immortal witch of legend known as Baba Yaga will risk all to save her country and her people from Tsar Ivan the Terrible—and the dangerous gods who seek to drive the twisted hearts of men.

As a half-goddess possessing magic, Yaga is used to living on her own, her prior entanglements with mortals having led to heartbreak. She mostly keeps to her hut in the woods, where those in need of healing seek her out, even as they spread rumors about her supposed cruelty and wicked spells. But when her old friend Anastasia—now the wife of the tsar, and suffering from a mysterious illness—arrives in her forest desperate for her protection, Yaga realizes the fate of all of Russia is tied to Anastasia’s. Yaga must step out of the shadows to protect the land she loves.

As she travels to Moscow, Yaga witnesses a sixteenth century Russia on the brink of chaos. Tsar Ivan—soon to become Ivan the Terrible—grows more volatile and tyrannical by the day, and Yaga believes the tsaritsa is being poisoned by an unknown enemy. But what Yaga cannot know is that Ivan is being manipulated by powers far older and more fearsome than anyone can imagine.

Olesya Salnikova Gilmore weaves a rich tapestry of mythology and Russian history, reclaiming and reinventing the infamous Baba Yaga, and bringing to life a vibrant and tumultuous Russia, where old gods and new tyrants vie for power. This fierce and compelling novel draws from the timeless lore to create a heroine for the modern day, fighting to save her country and those she loves from oppression while also finding her true purpose as a goddess, a witch, and a woman.


* This audiobook includes a downloadable PDF of the glossary and map from the book.

Olesya Salnikova Gilmore: Olesya Salnikova Gilmore was born in Moscow, Russia, raised in the U.S., and graduated from Pepperdine University with a BA in English/political science, and from Northwestern School of Law with a JD. She practiced litigation at a large law firm for several years before pursuing her dream of becoming an author. She is most happy writing historical fiction and fantasy inspired by Eastern European folklore. She lives in a wooded, lakeside suburb of Chicago with her husband and daughter. The Witch and the Tsar is her debut novel.