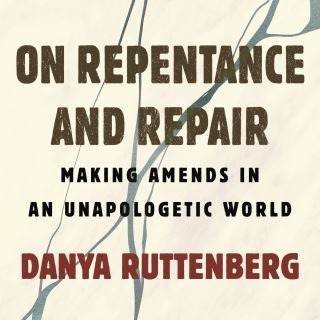 On Repentance and Repair

Repair and Amends in an Unapologetic World

A crucial new lens on repentance, atonement, forgiveness, and repair from harm—from personal transgressions to our culture’s most painful and unresolved issues

American culture focuses on letting go of grudges and redemption narratives instead of the perpetrator’s obligations or recompense for harmed parties. As survivor communities have pointed out, these emphases have too often only caused more harm. But Danya Ruttenberg knew there was a better model, rooted in the work of the medieval philosopher Maimonides.

For Maimonides, upon whose work Ruttenberg elaborates, forgiveness is much less important than the repair work to which the person who caused harm is obligated. The word traditionally translated as repentance really means something more like return, and in this book, returning is a restoration, as much as is possible, to the victim, and, for the perpetrator of harm, a coming back, in humility and intentionality, to behaving as the person we might like to believe we are.

Maimonides laid out five steps: naming and owning harm; starting to change/transformation; restitution and accepting consequences; apology; and making different choices. Applying this lens to both our personal relationships and some of the most significant and painful issues of our day, including systemic racism and the legacy of enslavement, sexual violence and harassment in the wake of #MeToo, and Native American land rights, On Repentance and Repair helps us envision a way forward.

Rooted in traditional Jewish concepts while doggedly accessible and available to people from any, or no, religious background, On Repentance and Repair is a book for anyone who cares about creating a country and culture that is more whole than the one in which we live, and for anyone who has been hurt or who is struggling to take responsibility for their mistakes.

Danya Ruttenberg: Rabbi Danya Ruttenberg is an award-winning author and writer who serves as scholar in residence at the National Council of Jewish Women (NCJW). She was named by Newsweek as a “rabbi to watch” and a “faith leader to watch” by the Center for American Progress, and she has been a Washington Post Sunday crossword clue (83 Down). The author of several books, she has written for the New York Times, the Washington Post, The Atlantic, Time, and other publications.