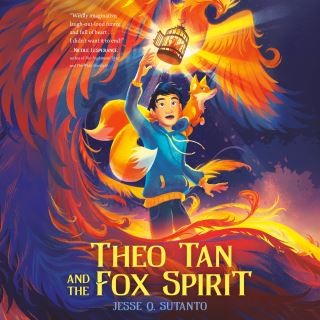 Theo Tan and the Fox Spirit

After inheriting a grieving fox spirit, a Chinese American boy must learn to embrace his heritage to solve the mystery of his brother's death in Jesse Q Sutanto's magical, action-packed middle grade fantasy, Theo Tan and the Fox Spirit.

Theo Tan doesn't want a spirit companion. He just wants to be a normal American kid, playing video games, going to conventions, and using cirth pendants to cast his spells like everyone else. But, when his older brother dies, Theo ends up inheriting Jamie's fox spirit, Kai.

Kai isn't happy about this either. Theo is nothing like Jamie, and the two of them have never gotten along. But, when they realize the mysterious journal Jamie left Theo is filled with clues and secret codes, it's clear that something strange was going on with Jamie's internship at Reapling Corp.

But the only way onto the campus is the highly competitive "Know Your Roots" summer camp program, a celebration of Chinese and Indian cultures designed to help connect students with their heritage. Theo and Kai will have to put aside their differences long enough to honor Jamie's last wishes, or the mystery he died for will remain unsolved forever...

Jesse Q. Sutanto: Jesse Q. Sutanto grew up shuttling back and forth between Indonesia, Singapore, and England, and considers all three places her home. She has forty-two first cousins and thirty aunties and uncles, many of whom live just down the road. When she’s not writing, she’s playing games with her husband, or making a mess in the kitchen with her two daughters.