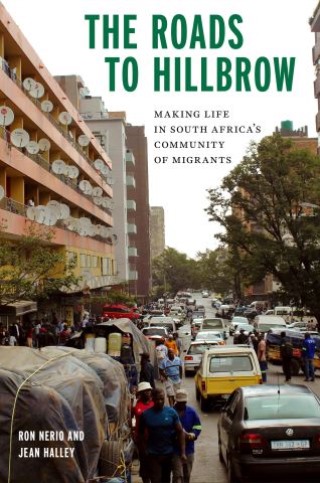 The Roads to Hillbrow

This highly accessible portrayal of a post-apartheid neighborhood in transition analyzes the relationship between identity, migration, and place.

Since it was founded in 1894, amidst Johannesburg’s transformation from a mining town into the largest city in southern Africa, Hillbrow has been a community of migrants. As the “city of gold” accumulated wealth on the backs of migrant laborers from southern Africa, Jewish Eastern Europeans who had fled pogroms joined other Europeans and white South Africans in this emerging suburb. After World War II, Hillbrow became a landscape of high-rises that lured western and southern Europeans seeking prosperity in South Africa’s booming economy. By the 1980s, Hillbrow housed some of the most vibrant and visible queer spaces on the continent while also attracting thousands of Indian and Black South Africans who defied apartheid laws to live near the city center. Filling the void for a book about migration within the Global South, The Roads to Hillbrow explores how one South African neighborhood transformed from a white suburb under apartheid into a “grey zone” during the 1970s and 1980s to become a “port of entry” for people from at least twenty-five African countries.

The Roads to Hillbrow explores the diverse experiences of domestic and transnational migrants who have made their way to this South African community following war, economic dislocation, and the social trauma of apartheid. Authors Ron Nerio and Jean Halley weave sociology, history, memoir, and queer studies with stories drawn from more than 100 interviews. Topics cover the search for employment, options for housing, support for unaccompanied minors, possibilities for queer expression, the creation of safe parks for children, and the challenges of living without documents. Current residents of Hillbrow also discuss how they cope with inequality, xenophobia, high levels of crime, and the harsh economic impacts of COVID-19.

Many of the book’s interviewees arrived in Hillbrow seeking not only to gain better futures for themselves but also to support family members in rural parts of South Africa or in their countries of origin. Some immerse themselves in justice work, while others develop LGBTQ+ support networks, join religious and community groups, or engage in artistic expression. By emphasizing the disparate voices of migrants and people who work with migrants, this book shows how the people of Hillbrow form connections and adapt to adversity.

Ron Nerio: Ron Nerio is a research programs director at the Central Office of the City University of New York and an adjunct lecturer of sociology at Fordham University.|||Jean Halley is a professor of sociology at the Graduate Center and the College of Staten Island CUNY. She is the author of five books, including the recently published Horse Crazy: Girls and the Lives of Horses.