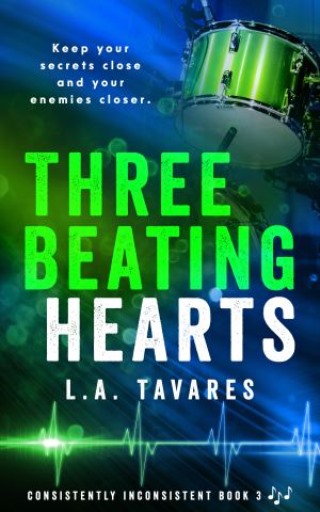 Keep your secrets close and your enemies closer.

Dominic Trudell has been Consistently Inconsistent's drummer since the band's conception. He keeps to himself, separates his regular life from his fame, is brilliant beyond measure and is a self-proclaimed bachelor. He has never said &#8216;I love you' and has no intention to start now.

When Stasia Marquette joins Consistently Inconsistent, there is only one rule—no inter-band relationships. Dom, who isn't known for dating or breaking rules, is doing both.

She's captivating him in ways he can't explain, but he doesn't do love—never has—and she wants more than he can give her.

While he's pushing her away—more for her own good than his—she finds herself tangled up with someone from Dom's past, and that man knows that Dom keeps secrets as well as he keeps time.

Dom tries to keep his backstory hidden, while the band will do anything to stay on the charts. Can they stay relevant—or is it time for them to take their last bow?

L A Tavares: When it comes to romance, L A doesn't have a type. Sometimes it's dark and devastating, sometimes it's soft and simple - truly, it just depends what her imaginary friends are doing at the time she starts writing about them.L A has moved to various parts of the country over the last ten years but her heart has never left Boston.And no, the “A” does not stand for Anne.