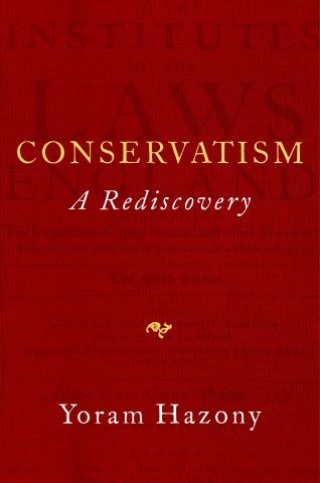 The idea that American conservatism is identical to "classical" liberalism—widely held since the 1960s—is seriously mistaken.

The award-winning political theorist Yoram Hazony argues that the best hope for Western democracy is a return to the empiricist, religious, and nationalist traditions of America and Britain—the conservative traditions that brought greatness to the English-speaking nations and became the model for national freedom for the entire world.

Conservatism: A Rediscovery explains how Anglo-American conservatism became a distinctive alternative to divine-right monarchy, Puritan theocracy, and liberal revolution. After tracing the tradition from the Wars of the Roses to Burke and across the Atlantic to the American Federalists and Lincoln, Hazony describes the rise and fall of Enlightenment liberalism after World War II and the present-day debates between neoconservatives and national conservatives over how to respond to liberalism and the woke left.

Going where no political thinker has gone in decades, Hazony provides a fresh theoretical foundation for conservatism. Rejecting the liberalism of Hayek, Strauss, and the "fusionists" of the 1960s, and drawing on decades of personal experience in the conservative movement, he argues that a revival of authentic Anglo-American conservatism is possible in the twenty-first century.

Yoram Hazony: Yoram Hazony, an award-winning political theorist, is the chairman of the Edmund Burke Foundation in Washington and the president of the Herzl Institute in Jerusalem. His previous book, The Virtue of Nationalism (Basic Books, 2018), was named Conservative Book of the Year for 2019 by the Intercollegiate Studies Institute and has been translated into half a dozen languages. He appears frequently in the U.S. media, including the Wall Street Journal, New York Times, Fox News, CNN, NPR, Time, The New Republic, The Ben Shapiro Show, and the Rubin Report. A graduate of Princeton University (B.A.) and Rutgers (Ph.D.), Hazony lives in Jerusalem with his wife and children.