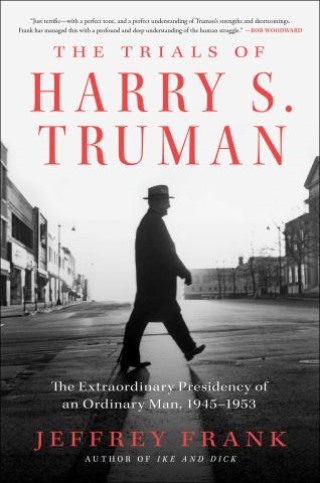 The Trials of Harry S. Truman

The Extraordinary Presidency of an Ordinary Man, 1945-1953

Jeffrey Frank, author of the bestselling Ike and Dick, returns with the first full account of the Truman presidency in nearly thirty years, recounting how so ordinary a man met the extraordinary challenge of leading America through the pivotal years of the mid-20th century.

The nearly eight years of Harry Truman’s presidency—among the most turbulent in American history—were marked by victory in the wars against Germany and Japan; the first use of an atomic weapon; the beginning of the Cold War; creation of the NATO alliance; the founding of the United Nations; the Marshall Plan to rebuild the wreckage of postwar Europe; the Red Scare; and the fateful decision to commit troops to fight in Korea.

Historians have tended to portray Truman as stolid and decisive, with a homespun manner, but the man who emerges in The Trials of Harry S. Truman is complex and surprising. He believed that the point of public service was to improve the lives of one’s fellow citizens, and was disturbed by the brutal treatment of African Americans. Yet while he supported stronger civil rights laws, he never quite relinquished the deep-rooted outlook of someone with Confederate ancestry reared in rural Missouri. He was often carried along by the rush of events and guided by men who succeeded in refining his fixed and facile view of the postwar world. And while he prided himself on his Midwestern rationality, he could act out of emotion, as when, in the aftermath of World War II, moved by the plight of refugees, he pushed to recognize the new state of Israel.

The Truman who emerges in these pages is a man with generous impulses, loyal to friends and family, and blessed with keen political instincts, but insecure, quick to anger, and prone to hasty decisions. Archival discoveries, and research that led from Missouri to Washington, Berlin and Korea, have contributed to an indelible, and deeply human, portrait of an ordinary man suddenly forced to shoulder extraordinary responsibilities, who never lost a schoolboy’s romantic love for his country, and its Constitution.

Jeffrey Frank: Jeffrey Frank was a senior editor at The New Yorker, the deputy editor of The Washington Post’s Outlook section, and is the author of Ike and Dick. He has published four novels, among them the Washington Trilogy—The Columnist, Bad Publicity, and Trudy Hopedale—and is the coauthor, with Diana Crone Frank, of a new translation of Hans Christian Andersen stories, which won the 2014 Hans Christian Andersen Prize. He is a contributor to The New Yorker, and has written for The New York Times, The Washington Post, The Wall Street Journal, The Guardian, Bookforum, and Vogue, among other publications.